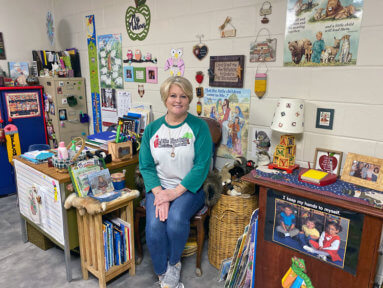 
Dawna Day Mathews sits in one of her favorite spots where she teaches children the love of reading. After 25 years, she’s still excited each year when it’s time for registration and “Little Blessings” Christian Preschool gets underway.

What a blessing “Little Blessings” Christian Preschool has been over the past 25 years! More than 1200 children have come through the doors and went out better prepared for school after having the best teachers. “Well we loved them the best,” Dawna Day Mathews noted as she shared some of her journey operating the preschool the whole time it has been going. “We just love kids here,” was her simple reasoning for having a preschool. The word Christian means a lot to her as well. The students get a good basis about the Bible and Christian principles while there.

Mathews said she and Ann Meister put their heads together 25 plus years ago, and said, “We need a Christian preschool.” As anything else, sometimes when you want something, you have to make it happen and “Little Blessings” was established.

Mathews writes her own curriculum with an emphasis on preparing students for kindergarten in public school. They started with half days, Monday, Wednesday, and Friday, and now have grown to offer full days on those days of the week.

At “Little Blessings” the children learn many different things, the regular ABC’s and 123’s, but beyond that they are taught so much more. They are taught how to treat each other with kindness, play old-fashioned games, have old-fashioned toys, learn how to give back by holding their St. Jude’s Trike-A-Thon each year, celebrate with the community by being in the Versailles Pumpkin Show parade, have a preschool prom for Valentine’s Day, learn the value of grandparents by celebrating them, and can even be seen bringing pets to school for Pet Day.

“There’s so much more than bookwork that goes on here,” Mathews told The Versailles Republican. The cornerstone for their preschool is built on the Bible and Jesus Christ. They learn memory verses from the Bible, and have even been known to go Christmas Caroling at nursing homes in the early years.

Their Christmas and graduation programs are second to none with the Versailles Church of Christ being packed to capacity on those days. The children’s work is showcased through elaborate programs complete with costumes, songs, prayer by the children and recitations. They get the feel of being in front of an audience, and for some it’s the first time. It gives them confidence to get up in front and communicate.

A quick stop at the preschool makes you realize how much the teachers love the students. Their handy phones are out all day taking photos and sharing with the families. “We do get permission to take the picture and share them,” Mathews noted. She said each child has a scrapbook at the end of the year.

From her early years as a teacher’s aide at ROD at Sunman, Mathews teaches the children sign language. “Actually, many of the skills I helped with there has helped me with children down through the years,” she confided. She said some children don’t know how to hold a pencil or scissors and that’s all part of her delight to show them.

The children learn about not only what it’s like to be an American, as they boldly stand and recite the Pledge of Allegiance each day, and the pledge to the Bible, but they also learn about countries around the world. You never know when you stop in what they might be learning that day. Sometimes the teachers are dressed in different costumes that compliment the country they are studying. They have snacks planned around each themed event and truly have fun while teaching children at the same time. All of the snacks and school supplies are provided for the children. “We don’t have a list of items for parents to buy,” Mathews said.

“I love it. I just can’t imagine doing anything else at this point,” Mathews noted. She truly has a passion for teaching children and it shows. She noted that people trust them and the staff are all experienced moms and grandmothers that are Christian ladies.

“What’s the most important thing you teach here?” was asked of Mathews. Without hesitation, she said, “Introducing them to Jesus for kids who don’t know Him, and preparing these precious children for kindergarten, whether it be academically, socially and/or emotionally.”

They’ve added an outdoor playground in recent years, which is something Mathews wanted from the beginning. It gives the children a space to run and play and try new things inside a chain-link fence with lots of supervision. They have had many field trips in the big blue bus, but there came a time when it had to go. “And, now the law is that every child has to be in a booster seat,” Mathews said. She understands and agrees with the law, they just don’t have the seats. However, she has found that parents are willing to drive their children to some of the field trip events, such as the pumpkin patch, so they still can do some.

They also have a big storage shed, which was badly needed Mathews fondly noted that her father, the minister at the Versailles Church of Christ for over 60 years, the late Brother Dale Day, drove the bus. He was the principal, but no one was scared of him. His love for people certainly was extended at all times to the children.

Things have changed over the years. They now have the building secure at all times with camera/video systems in place. Some of these changes are simply keeping the children safe, which is also a priority.

Mathews would like to plan some type of reunion later this summer for all the children who have come through the doors. She said anywhere she goes locally invariably someone will walk up to her and say, “Hi, Mrs. Mathews!” It warms her heart and prayers are always on her lips as she remembers her students over the years.

The teachers, besides Mathews, include, Christy Patrick, Lisa Thieman, Dana Vest, Heather Hunt and teaching assistant Lynnette Lee. An Early Bird Registration is being held March 14 and is a walk-in enrollment from 10 a.m. to 1 p.m. This will be held at the preschool location at 115 Jarvis Dr., Versailles. You can also call Mathews at the school at 812-689-6873 or call Mathews’ cell phone at 812-621-3336.