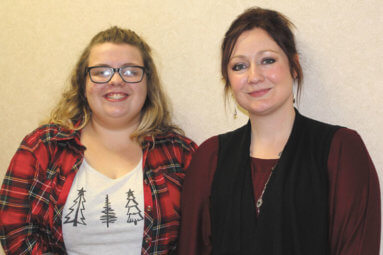 
Milan High School sophomore Melissa Frankenberry recently received the honor of a Hero of Character upon being nominated by Stephanie Schwing-Stamper. Frankenberry exemplifies her role as a hero in her daily life as she stands up against bullying, supports her peers, and empowers fellow students.

A hero is defined as a person who is admired or idealized for courage, outstanding achievements, or noble qualities. Melissa Frankenberry embodies that description, based not only on a nomination by Stephanie Schwing-Stamper, Milan schools SEL coordinator, but also being named a Hero of Character by the Character Council, located in West Chester, Ohio.

Melissa was unaware that she had even been nominated for this honor, much less received the honor. In fact, when she found out she won, she was called down to Schwing-Stamper’s office, and Ryan Langferman, school principal, was also sitting there. She thought she might be in trouble. Instead she was given the email sent to Schwing-Stamper announcing she was named a Hero of Character. Melissa said she was shocked. She later received an official invitation to attend an event at the Savannah Center honoring the 2019 Heroes of Character. Her parents were also able to attend.

Schwing-Stamper included in her nomination that she “has known this young lady since her sixth grade year, and Melissa has always stood out as an upstander.” I asked Melissa what being an upstander meant to her. She said it was helping other people when no one else would; to not be a bystander. According to Schwing-Stamper, Melissa often stood up for other people, even when no one was standing by her. In fact, Melissa was often bullied herself. “[She] just ignored it or brushed it off. [She was] more concerned about other people,” added Schwing-Stamper. In the nomination, Schwing-Stamper included that “during her middle school years, Melissa often felt that she was an outcast because she never followed the crowd and always stood up against bullying and teasing of underprivileged students. She often became the target of teasing and rude comments because she placed herself between the bully and the victim.”

Melissa also discovered during her middle school years that her mother was diagnosed with leukemia. In addition to school, Melissa began helping her mother care for her infant brother. Even with her own added stress and family issues, “Melissa continues to support her peers at school, stand for those who cannot stand on their own, guides new students, and volunteers her time to empower fellow students,” Schwing-Stamper added in her nomination. In addition to her already busy life, she will now be taking on a job.

Melissa is very humble about this honor. She smiled, saying that other than her friends at lunch calling her “Hero”, it hasn’t really affected who she is. Her family is proud of her and that means a lot to her. When asked about her future endeavors, she wasn’t sure what she wanted to do yet, but shows an interest in music production, nursing, and photography. Melissa is currently a sophomore at Milan High School, and is active in CARES (Change takes Action, Resources, Empowerment, and Support), mentors younger students, and helps guide new incoming and transfer students. She also works on the yearbook, manages athletics, and is involved in several clubs and groups.

Melissa said her mother is being put back on chemotherapy through January 2, prior to a bone marrow transplant on January 26. She is the oldest child of her family, with two brothers, one stepbrother, and two stepsisters. She has a lot on her plate, yet seems to take it all in stride. As Schwing-Stamper notes, “she presents [herself] with a smile, joke to cheer someone up, and a shoulder to cry on. For such a young woman, I am inspired daily by Melissa’s character.” That certainly seems to fit the role of a hero.