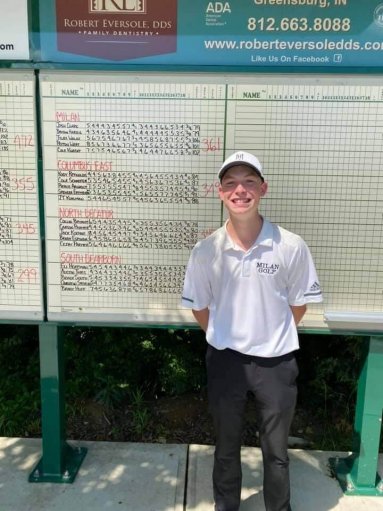 
Milan’s Josh Clark stands proudly after qualifying for the regional two weeks ago after winning a playoff hole at the IHSAA Boys Golf Sectional at Greensburg. Clark’s high school career came to a close this past Thursday after appearing in his second-ever regional meet.

Drew Wagner and Milan’s Josh Clark saw their individual seasons round out this past Thursday when the duo competed at the IHSAA Boys Golf Regional at the Champions Pointe Golf Club in Henryville.

Wagner missed that cut by five strokes and finished his day with an 18-hole score of 79. The Oldenburg golfer sat with a five-over par 41 after nine holes and was two-over par on the back nine to make up his seven-over par final score.

As for Clark, Milan’s top man was on a state qualifying pace on the front nine, shooting a two-over par 38 but the back nine on a challenging course proved to be a bit of a problem. The senior shot par on just two holes inside the back nine and finished with an 85 for the event.

No individuals of local interest punched their ticket to the state finals. Switzerland County’s Bryce Wrightsman also competed in the individual round of the regional but carded a 90 in his first regional tournament.

Center Grove won the regional with a score of 295 and Bloomington South sat runner-up with a 300. Franklin Community’s 307, Floyd Central’s 309 and Silver Creek’s 312 rounded out the top five.