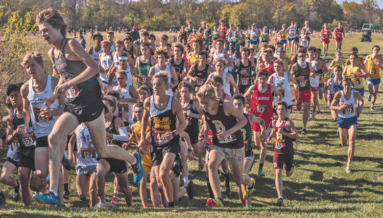 
Milan’s Ben Riehle (runner No. 44) runs towards the top of the pack as the IHSAA boys cross country semi-state meet kicks off on Saturday afternoon.

Batesville saw its season come to an end and several local runners ran their final meet of the year as local cross country action wrapped up this past Saturday at the IHSAA semi-state meet at Blue River Park in Shelbyville.

The girls meet saw Batesville finish 12th overall among 20 teams, scoring 259 points on the day. Carmel led the pack and won the semi-state with no trouble, scoring 30 points and Franklin Central was a distant runner-up at 125 points. Zionsville finished third with 135 points, North Central (Indianapolis) was fourth with 179 points and Noblesville rounded out the top five with 209 points. Franklin finished sixth and rounded out team qualifiers for the state championship meet at 211 points.

Batesville finished 13th in the boys portion of the meet, scoring 363 points. Brebeuf Jesuit won the semi-state with 68 points, besting runner-up Carmel who finished with 75 points. Noblesville was third with 107 points, Center Grove was fourth with 110 points and Guerin Catholic rounded out the top five at 152 points. Zionsville qualified for the state meet with a sixth place finish and 153 points.