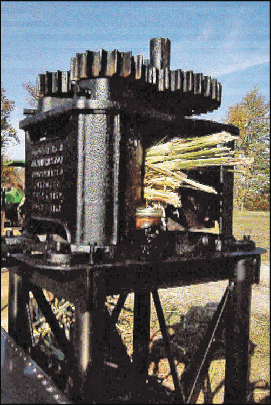 
Larry Barlow and his team of friends use the mill pictured to squeeze juice from their locally grown sweet sorghum crops each fall.

Larry Barlow, of Milan, is a regular at the Versailles Market on the Square. Barlow’s booth carries products from his small business Fallen Timbers Sorghum Mill, which is named after Fallen Timbers Creek that runs up to Barlow’s property from Versailles State Park. Barlow uses many of the tools and techniques from the three generations in his family who produced sorghum before he began running the operation on his land in 2008.

He began growing sorghum and making the syrup after moving his uncle’s mill, which was built by his uncle’s grandfather in 1890 on what is now Barlow’s brother’s property in Farmer’s Retreat.

Before Barlow established Fallen Timbers, he was a dentist. He is a woodworker, which has given him some of the tools and skills needed to get his sorghum and maple syrup operation to its current state.

Fallen Timbers Sweet Sorghum Syrup is available for purchase from Barlow (812-654-3920), as well as a few commercial retail stores in Rockville, Park County, and Richmond. He also sets up a booth at the Brookville and Rushville Antique Machinery shows each year.