Rob Lafary
Staff Writer
Published in the Versailles Republican, May 20, 2021 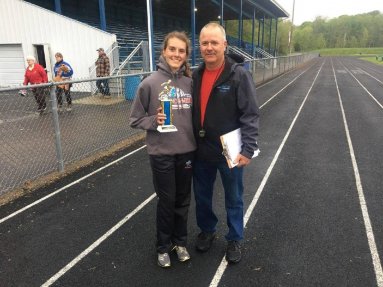 
Jac-Cen-Del’s Cloey Simon, the Ripley County MVP this year, was crowned a sectional champion in the 300 hurdles on Tuesday night and helped the Lady Eagles to a fourth place finish in the 1600 relay.

Batesville placed among the top three in the field and several locals punched their ticket to next week’s regional as part of the IHSAA Girls Track and Field Sectional on Tuesday night at East Central.

Among coverage area teams, two schools produced sectional champions on the evening. Batesville’s Kylie Raver, Ava Hanson, Katie Olsen and Megan Allgeier won the 3200 relay in a time of 9:58.59 and Jac-Cen-Del’s Cloey Simon won the 300 hurdles in a time of 47.37 seconds. Those five will head to the regional as one of the top favorites to advance to the state finals.

Cloey Simon, Kayla Simon, Emma Newhart and Megan Weber gave Jac-Cen-Del a fourth place 1600 relay team in 4:34.70 while Kayla Simon was runner-up in the 300 hurdles in 49.03 seconds. Milan’s best finish was Sophia Thomas in the high jump. Thomas finished fifth with a jump of four feet and eight inches.
The regional will take place on Tuesday at Franklin Community High School. The first event is scheduled for 5:30 p.m.