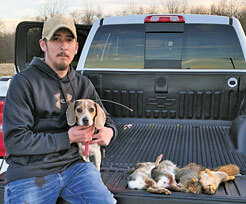 
Chris Wong and Gracie pose after a good day hunting. The two have a close bond.

It’s been said that a dog is a man’s best friend. In this story, a dog was a best friend to more than one man. In the case of a fire that totally destroyed a home and could have claimed two lives, a little Beagle dog named Gracie is at the center of the story, yet was behind the scenes.

Last Wednesday morning a raging fire took the home of James and Jennifer Dowers and everything they owned with it. James had climbed onto the roof on the back side to escape the fire, but it would be a long jump to safety. About that time a man walked around the house and saw his dilemma. “Do you have a ladder?” James called.

Chris Wong had stopped to help, and knew from the status of the fire he didn’t have long to get James down from the roof. He quickly pulled his pickup truck to where James could jump into the bed of it. “Burr, it’s cold,” James said, who had narrowly escaped the flames with only his pajama bottoms and some slippers on his feet. Chris quickly gave the man a shirt he had in the truck and drove away from the flames, which had by now blown out the side wall where James had been perched on the roof. “It was probably two-maybe-five minutes at the most,” Chris told The Versailles Republican.

As he remembers the day, he asked if anyone else was inside and James told him there was a woman, his mother-in-law. Chris said a guy in another pickup truck and an Amish man, only known as Levi, went through the front door and rescued her. His wife, Jennifer, was a work, and the children were at school.

“I saw the man (James) and the lady in the other guy’s truck and knew they were safe, so I left,” Chris says.

But, Chris lives in Greenwood. What in the world was he doing near 2846 W. 800 S, Versailles, where the home went up in a blaze?
Here’s the story behind the story:

Here’s where Chris’s dog, Gracie, enters the picture. He wouldn’t have been anywhere near that area, one he was not familiar with, if she hadn’t gotten lost.

Chris had loaned his hunting dog to a friend who lives in Canaan. Somehow she had gotten away from the friend and began a journey that would take her owner on a five-day odyssey and lead him directly (in a round about way) to the burning house.

Chris took off work on Saturday, February 9 to look for Gracie. He covered every inch of back roads he had never been on in his life looking for his dog. “She’s only 14 months old, still in training, and would never get very far from me,” he said. This made him wonder how in the world she would ever run away in the first place. He looked, and looked. He drove to Greenwood Sunday night for work, and then returned to the area on Monday to spend another day looking. He called his mother, who lives in California. “I’ve got to work, I don’t know what to do,” Chris told her, saying there were so many variables, he didn’t think he would find his beloved dog.

Finally, Chris caught a break and saw Gracie in a field, about 80 yards away. He called to her as he ran into the flooded area and searched another nine hours. But, she didn’t come to him as usual. She ran in the opposite direction. This was on Tuesday, February 12. He had stopped and talked with people in nearby houses and had actually pulled into the driveway of the Dowers’ property the day before the fire, looking for his dog.

Again, he felt defeated, because he hadn’t been able to get Gracie. He even cut up pieces of a sheet that she laid on and placed strips alongside the road for her to pick up the scent. Nothing. Tuesday night, he was ready to give up looking for Gracie. He called his mom, who suggested he try one more day.

Wednesday morning, February 13 Chris had decided to look one more time in the area where he had spotted Gracie. But, he still couldn’t find her. He knew that was the last day he would be able to go back and forth to Greenwood. With a heavy heart he began the search, but found something different. This time, he saw the house on fire where he had been just a day before.

After saving the man from the rooftop, Chris said he was told the children were at school and there was no one else in the home, he thought he would leave and not have another vehicle cluttering up the driveway when the fire trucks arrived. He took one last shot at driving down a dead end road in the area. His phone rang. On the other end was a man who identified himself as Lonnie, and he said, “Hey, I’ve got your dog.”

Chris said those were the best words he could ever hear, and went directly to the home of Ruth Tompkins and Lonnie Crite, where he was reunited with Gracie.

Ruth said the little dog was scratching at the door, so she let it in. She said she cleaned off the muddy paws, gave Gracie some nourishment, while Lonnie took the number from the collar and made the call. “They were the best people in the world,” Chris noted.

“Gracie whimpered and nudged Chris and he was loving on her, it was just beautiful,” Ruth told The Versailles Republican.

Through all of this Chris realized, “I was meant to be there”. The 2007 graduate of Madison High School, said he realized he had a purpose to drive all around the roads. He even noted that when Gracie ran from him, that it was meant to be. “It was a very surreal feeling,” he told The Versailles Republican. “I don’t live here and ordinarily wouldn’t have loaned my dog to anyone, it seems like God placed me there at the exact time I was needed.”

Chris fully believes that his dog knew something and stayed away until he had time to rescue James from the rooftop of his home. Ruth and Lonnie believe it too. “Things just happen for a reason sometimes,” Ruth told The Versailles Republican. She made the call to the newspaper wanting others to know the story. Chris was very humble about it all. He offered a $200 reward for the dog, but Ruth refused the money. So, Saturday, Chris went to the post office in Greenwood and mailed out some thank you notes, and among those were $200 in gift cards he sent to Ruth. She said, “We are giving the cards to the Dowers family.”

While at the post office, Chris said a man came inside and said, “Who drives the white Silverado parked out front? It just got hit.” Chris said his heart sank, because it was his truck, but when he checked on it, there was no damage. “It was another one of those surreal moments – kind of wrapping up a week from when I had loaned out Gracie.”

The community has come together for the family, who only escaped with the clothes they had on their backs. There was nothing but charred wood at the end of the fire that saw several fire departments responding that day.

The Shelby Christian Church sent out a van where the firemen could warm up and offered them sandwiches and drinks throughout the day of the fire. The family attends the Shelby Christian Church, where they have a space for people to bring items for the family. Tim Heim, preacher at the church, is taking care of getting items to the family that are dropped off at the church.

If you would like to help, you can contact Heim, at 812-621-3929 to see what else is needed at this time. Kim Jolly, a member of the church, is taking the monetary gifts to the family. The Dowers family is staying with a married son, who didn’t live with them. They have two daughters, Savannah, a third grader, and Hayley, a sixth grader at South Ripley Elementary School. The school was also receiving monetary donations for the family.