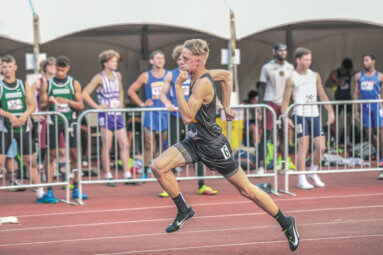 
Milan junior Matt Riehle competes in the 400 meter dash at the Robert C. Haugh Track & Field Complex, Indiana University, Bloomington, where the IHSAA State Finals were hosted. The boys events were held on Friday, May 31.

Matt Riehle, regional champion in the 400 meter dash, ran a time of 49.95 to earn a 15th place finish in a field of 27 competitors. The 400 meter dash was a single race, held over three heats, with no preliminary round. Riehle’s time was just four-tenths of a second slower than his regional race. Riehle’s time equates to him traveling at a speed of about 18 miles per hour.

Milan track & field coach Kevin Dines commended Riehle not only on his state finals performance, but on his team leadership as well: “Matt has been a leader for the Milan track program for the last two years. [His] hard work and dedication pushed him into the state finals this year.”

In addition to his athletic success, Riehle was recently installed as the president of Milan’s chapter of the National Honor Society.

Jahn Riley of Pike was crowned as the 2019 400 meter dash champion, finishing in a time of 47.53 seconds. The state record was set in 2002 by David Neville of Merrillville when he finished in 46.99 seconds.

In the state finals, Cole averaged a per lap pace of about 1:27, and a mile pace of 5:48. That means she ran the distance of nearly two miles at a speed of 10.34 miles per hour.

“Megan ended her season on a positive note,” South Ripley track & field coach Jim Cole wrote, adding, “She is proof of what hard work, dedication, a positive attitude, and a love for a sport can produce.”

Coach Cole was excited to announce that Megan’s season is not actually finished yet, as she was selected to compete on the Indiana All-Star track team. A meet is scheduled to be held on Saturday, June 8 at Michigan State University consisting of Indiana, Ohio, and Michigan all-star teams.

Ripley County was also represented at the state finals by Batesville High School’s Adam Moster. In the 800 meter race, Moster placed eighth in a field of 27 racers, finishing in a time of 1:55.02.

After her all-star meet this weekend, Cole will look forward to running for Northern Kentucky University, where she will attend college this fall. Riehle still has his senior year at Milan to look forward to in the fall.