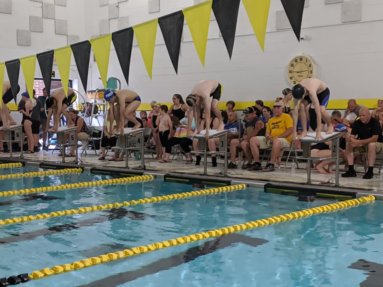 
Milan Aquatics kicked off its season at home against Decatur County before picking up a home win over Switzerland County a week later. The team, made up of 50 local student-athletes, looked for continued success yesterday when they made the short trip to compete against Batesville.

Although the swim year in the world of sports has wrapped up for the 2020-2021 school year, summer swimming is now in full swing as the Milan Aquatics program has already competed in two events in recent weeks.

The program is an amateur organization and is made up of 50 student-athletes from Milan and the surrounding community. The team is headed up by Steve Stock with assistant coaches for the summer being Tori Haessig and Adam Volz.

Milan Aquatics kicked off the 2021 campaign on May 27 with a dual meet against the Decatur County Tiger Sharks. Team scores for the event were not available but Milan did report that several top individual finishes were had at the meet.

The Aquatics followed up their first meet with a home win over the Switzerland County YMCA Sharks on June 2. Milan made it a clean sweep over Switzerland County, totaling a combined 741-398 score in the meet. The boys won 309-239 while Milan’s girls picked up a 432-159 victory.

Milan was slated to compete on Wednesday against Batesville at the Batesville Memorial Pool.