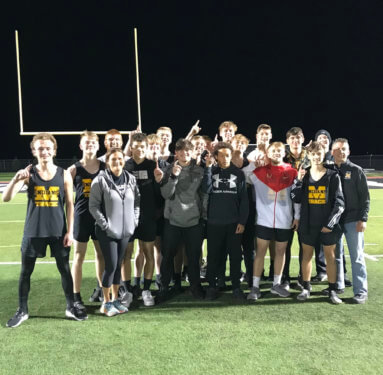 Milan’s boys track and field team hit triple digit scoring while the girls competed among eight teams in the Panther Invitational last Friday night at Knightstown.
The Indians scored 126 points in the boys meet for the championship while Tri was runner-up with 101 points. South Decatur at 94 points, North Decatur at 77 points and Waldron at 66 points rounded out the top five. Shenandoah was sixth with 60 points, Knightstown seventh at 40 points and Indiana Math and Science finished eighth with five points.

Mason Green finished runner-up in the 300 hurdles and Cavins was second in the 200 dash. Potts was third in the 800 run and Jon Aldridge placed third in the discus.

The girls portion of the meet saw Milan score 48.5 points for its sixth place finish. South Decatur won the girls title with 113.5 points and North Decatur was runner-up with 105 points. Shenandoah scored 89 points and was third, followed by Tri and Waldron with 72 points and 70 points respectively. Knightstown was seventh with 36 points and Indiana Math and Science was eighth with 32 points.

The Indians compete on Thursday in a four-way meet in Seymour against Trinity Lutheran, Jac-Cen-Del and Shawe Memorial.