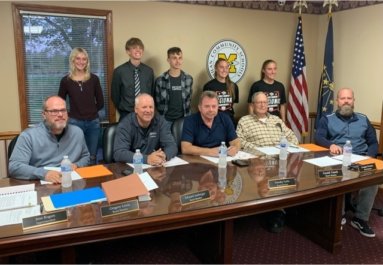 
Milan School Board members (seated) were honored to have student athletes (standing) who competed at regional events at the October meeting. The students were recognized at the meeting for their efforts that not only include athletics, but academic achievements as well.

At the October meeting of the Milan school Board of Trustees Superintendent Jane Rogers invited Mrs. Schwing-Stamper to speak about the $662,000 grant the school has been approved to get. The REACH Grant, given by the Indiana Department of Education will be used over the next three years. This is for hiring staff and to grow the before and after school tutoring and mentoring programs. It will also offer a six-week summer camp program. Milan CARES is a community partner.

This grant will make a difference in the lives of students at Milan Schools. Mrs. Schwing-Stamper was thanked for writing the grant.

The following were recognized: Kayla Walke, participated in the Girls Golf Regional, placing 10th. This is the first time a girl from Milan has ever made it to regional competition for golf. Those participating in Cross Country Regional were introduced: Ben Riehle, Aiden Potts, Lucy Lillis and Renee Lillis. Riehle advanced to semi-state. Coach Brian Potts noted that all four of these students are dual sport fall athletes as well.

Taylor Mann was hired as a home-bound instructor; the resignations of Heather Hacker as an instructional aide, and Tammy Jutzi as elementary school nurse, was approved. Jessica Miller will be an instructional aide. Tony Clark was approved for JV, Kirt Kohlmeier for freshman girls, Baylee Yorn for 8th grade, Bryan Beeler for 7th grade, and Michelle Heinrich for 6th grade. Brandy Hicks will serve as the FAC Coordinator.

Hal Kovert was on hand to review the ongoing building projects. He said elementary school projects are nearly completed. The garage doors for the new maintenance building are expected to be in soon along with the new HVAC unit for the pool.

The middle and high school renovations are also nearly completed. He noted that as the material comes in, it is being installed. It was reported that the roof is progressing. While the company has been able to keep materials on hand, they are struggling with labor shortages, but still making progress.

Recommendation of the updated Classified Handbook was accepted.

Classified staff salary recommendation was approved. A one dollar per hour raise for classified staff includes: central office staff, secretaries, instructional assistance, student support staff, custodians/maintenance, cooks and bus drivers, was approved. It was noted the increase will continue to help the corporation attract and employ high quality candidates. Substitutes were also given a pay increase.

A salary increase and contract rollover was approved for Mr. Langferman, Mr. Murphy and Mr. Prifogle.

Two fundraiser requests were approved: SADD Chapter to host a Halloween Dance and the CARES group to sell Spooky Grams during student lunches.

Editor’s Note: Information for this story was taken from unofficial minutes.