Rob Lafary
Staff Writer
Published in the Osgood Journal, May 25, 2021 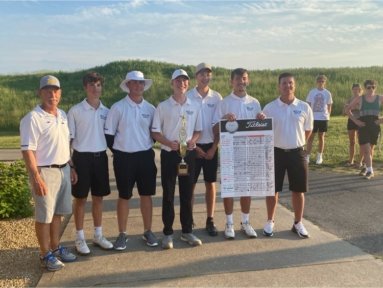 
Milan boys golf dominated its way to the ORVC Championship this past Saturday with a team score of 333. All four Milan golfers in the scoring round were named to the All-Conference team.

Milan boys golf dominated five other teams on Saturday and in doing so, captured the Ohio River Valley Conference championship at The Links at Rising Star Casino Resort.

Winning by nearly 50 strokes, the Indians won the conference title with a team score of 333, besting runner-up Shawe Memorial who sat at a 382. Switzerland County was third with a 386, Rising Sun fourth at 412 and Jac-Cen-Del fifth with a 478. Southwestern (Hanover) competed but did not have enough golfers to qualify for a team score.

Milan took the top two individual spots in the conference and put four golfers on the All-ORVC team. Josh Clark shot an 18-hole one-under-par 70 for the day and was the individual conference champion while Bryson Harris was runner-up with a 75. Peyton Wert and Cole Knecht punched all-conference tickets with a 94 apiece. Milan’s Tyler Walke shot a 100 in a non-scoring round.

Milan competes in the Rising Sun Invitational on Wednesday while Jac-Cen-Del competes on Thursday at home against Southwestern.