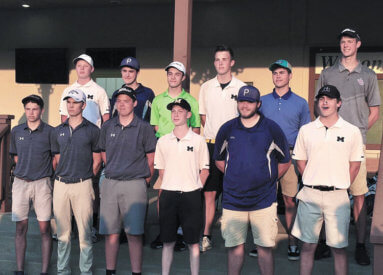 
submitted photo
Milan’s Joe Hawk, Matt Schmitt, Josh Clark, and Parker Lewis, and Jac-Cen-Del’s Garrett Boor, are pictured alongside golfers from other ORVC schools who were named to the all-conference team for 2019.

Golfers from Ohio River Valley Conference schools convened upon the challenging course at Rising Star on Saturday, May 18 to see who was the best in the conference.

Southwestern’s Austin Kramer medaled among individuals with a score of 74, three over par for the course.

Four golfers from Milan earned all-conference honors, which are granted to the top 12 individuals at the meet. Those athletes included Josh Clark (who tied for third overall), Parker Lewis, Joe Hawk, and Matt Schmitt.

Garrett Boor, senior from Jac-Cen-Del, was also named to the all-conference team with a score of 96.