Published in the Versailles Republican, September 16, 2021 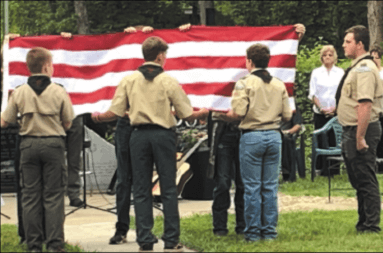 
Pictured above Col. Boone’s family was honored with the the American flag after it was folded by the Boy Scouts, pictured left, and presented to them. Boone lost his life in the Pentagon on September 11, 2001. The ceremony took place at the Daren Baker Memorial Park in Milan.

On Saturday, September 11 a remembrance service was held to honor Col. Canfield Boone, a native of Milan, and the thousands of others who perished in the 9/11 terrorist attacks 20-years-ago.

At 8:46, 9:03, 9:37 and 10:02, a 21-gun salute was done in recognition of the moment when each of the four planes crashed into the North Tower, the South Tower, the Pentagon, and a field in Shanksville, Pennsylvania, respectively.

The event’s most poignant moment came when Boy Scout Troop 631 folded the American flag and presented it to Boone’s family.