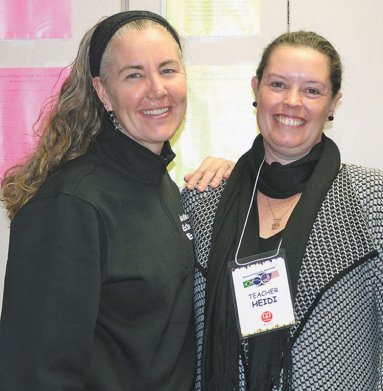 
Jessica Small-Summers (left), a high school teacher at Milan, hosted Heidi Bronzatti, an English teacher from Brazil for two weeks. Bronzatti observed classrooms at Milan schools, shared her culture and language, as well as being introduced to some of our culture.

Through the Bilateral Educator Exchange (BEE), a program offered through Global Indiana, Inc., Milan teacher Jessica Small-Summers hosted Heidi Bronzatti, an English teacher from Brazil. Bronzatti is from the state of Rio Grande do Sul, which is considered the sister state of Indiana, and teaches in a private Protestant school. She spent the past two weeks of her summer vacation observing classrooms in the elementary, middle, and high schools at Milan. In return, Bronzatti will host Small-Summers over her summer vacation so she can observe their classrooms and lifestyle.

Students from Milan were curious about Bronzatti and were full of questions about the type of food she eats, where she lives, and of course the language she speaks, which is Portuguese. She introduced herself in Portuguese so the students could hear the language. Small-Summers said the students were amazing with her, and would listen quietly as Bronzatti began talking. They really wanted to know her. Small-Summers said the exposure to someone from a different area was great for the kids and it was a good experience for them to see that people are all the same, no matter where they are from.

Small-Summers pointed out that while there were many differences among them both inside and outside of the classroom, there were also similarities. As for differences in the classrooms of the school where Bronzatti teaches, the children stay in one classroom and the teachers change classes. Their middle school and high school students attend school from 7:20 a.m. to 12:05 p.m., while the elementary and preschool students attend school between 1:15 p.m. and 6:00 p.m. They do not serve lunch at the school, so students and teachers alike leave the building for lunch. Although the hours are shorter, they go to school for 200 days compared to 180 days at Milan. There is a maximum of 25 students in the elementary classrooms and a maximum of 35 students in the high school. They have an Elementary 1 that consists of grades one through four; Elementary 2 consists of grades five through nine; and High School consists of grades 10 through 12.

The students in Bronzatti’s school do not have laptops in the classrooms, although they do have a computer lab. They only use books and notebooks (paper). Bronzatti did go on to say that most of the kids at her school have computers at home, so they can send homework by email if needed. They have projectors in the high school and a science lab. If either is needed, the teacher will take the students there. The teachers also do not have phones or computers in their classrooms, as they do in Milan. They have 40 teachers that share two computers. Bronzatti keeps her personal laptop with her at all times, as sometimes it is not easy to get a computer when it is needed.

As far as similarities at the school, the basic classes are the same, but Bronzatti’s school does not offer swim. Whereas Milan students might rotate between art and band, their students rotate between art, chess, and culinary. The students have each of these classes for three months. They have students that participate in band, choir, and sports, but these are considered extra activities and done outside the school. Both students in Milan and Brazil share many of the same interests, as well as the same problems and issues found in all schools.

Where Bronzatti lives, they do not have the convenience of canned goods or prepackaged salads. They can only purchase fresh produce and need to prepare each meal from scratch or buy a meal at a restaurant. That was probably one of the biggest differences she noted. But she also pointed out there are similarities. For example, the farming is similar to what is in Brazil. The tractors and machinery are the same, as well as many of the crops. The cash crops include wheat, corn, and soybeans. They also grow oats. Brazil has three growing cycles, compared to Indiana’s one. Bronzatti has animals, like many farmers do. They happen to raise their own meat. Although it is not typical, they also have their own slaughterhouse.

What both Small-Summers and Bronzatti found most in common was their day-in and day-out lives. While they live thousands of miles apart, they both have families, work, and activities like so many other people. Small-Summers said, “You can sometimes feel little in a small town, but you realize once you talk about family and your life, it’s all the same.”

Bronzatti returned home at the end of last week to begin her school year on February 17, where she is sure to share the experiences she had in Indiana. She said she enjoyed her time here where she took in many experiences, got lots of information, and found everyone to be so nice. She emphasized the way the teachers worked with the students and how concerned they are about each of them. She felt everyone was kind and respectful. As Bronzatti put it, “This was the coolest experience ever.”

Ripley Publishing will follow up with Small-Summers upon her return from Brazil to discover her experiences while in Rio Grande do Sul.