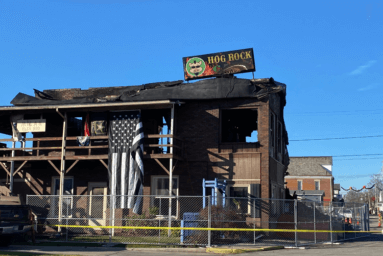 
Pictured above the remains of Hog Rock from the east side of the building reflects their love of “backing the blue” with this huge flag .

An evening that began with great food and entertainment turned into a tragedy when the Hog Rock Café in Milan burned to the ground on Thanksgiving Eve.
With fire departments across the county and beyond responding to the massive fire, they could only keep it contained as the flames and smoke billowed from the two-story structure that has been a rock in the community since 1915 when it first opened as a hotel and restaurant. It was also known as the Railroad Inn and since December of 2011 Hog Rock made its grand appearance on the property and has been known for their delicious food ever since.

Social media was buzzing by midnight with many people saying how sorry they were and their prayers were with the multiple fire departments and firefighters on the scene. One post told about how earlier that same evening, the staff of Hog Rock had made dinners for the sheriff’s department with a message on one of the pan lids that read: “Hog Rock says thanks to each and everyone of you for what you do for our community. Happy Thanksgiving! We back the blue!”

One lady wrote that she had no words to express how her heart was breaking for the owners of Hog Rock, Jeff and Chrissy Lanham. Melissa White Teer said the Lanhams were great people who would give the shirt off their back to help someone. She said they helped her to raise money for a loved one with a medical problem and have fed homeless people and donated to many charity events. She said they have also given to athletes from Milan High School and more.

On the Hog Rock Café Facebook page the owners wrote, “We are overwhelmed with the outpouring of support we have been shown from our family, friends, and community. We are devastated and heartbroken but the love we’ve received gives us hope. We want to thank everyone that has called, messaged, stopped by, and shared so many special memories of Hog Rock. Thank you to all the first responders that worked so hard to try to save our building. We love you all and are blessed to have each of you in our lives.”

While Milan Volunteer Fire Department was the lead in this case, they were bolstered by engines, ladders, tankers, brush trucks, and more from: Moores Hill, Osgood, Dillsboro, Manchester, Hogan Township, Sunman, Aurora, Rykers Ridge, Versailles, Batesville, Holton, Morris, Friendship, Napoleon, Delaware and Ripley County EMS Medic 1, Squads, 2 and 5. Police were also on hand at the scene that devastated a small community. But, Milan is a proud town and some have already begun to put Go Fund Me efforts in place, along with benefits to help the Lanhams and their employees, who have lost everything just a few weeks before Christmas.

There is no word on what caused the fire at this time. Clayton Kinder is the chief arson investigator for the state and is the lead on this fire. No foul play has been suggested, it is just being investigated to see where the fire originated from.