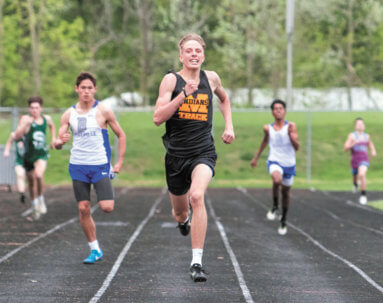 
Matt Riehle, junior at Milan High School, is seen en route to a 400 meter victory at the Ripley County Meet earlier this season. Riehle is running in the IHSAA State Finals in that race on Friday, May 31, at Indiana University, Bloomington.

Milan junior Matt Riehle continued his successful 2019 track and field season by winning the 400 meter dash at the Warren Central regional and earning a spot in the IHSAA State Finals on Friday, May 31 at the Robert C. Haugh Track & Field Complex, Indiana University, Bloomington. The 400 meter dash is scheduled for 7:05 p.m.

Riehle ran the race in 49.52 seconds, just .12 seconds off of the regional record at that site. Riehle bested New Palestine’s Lanie Schonauer, who finished in 49.83. He will enter the state finals ranked 12th overall based on regional times from across the state.

Jac-Cen-Del’s Damon Hughes finished 11th in the boys 1600 meter run, running the one mile distance in 4:48.5. The Eagles also had high jumper Garrett Boor competing. He finished in ninth place at a height of 6’0”.

South Ripley’s Mark Adams capped off his senior season with a 15th place finish in the discus, throwing 121’9”.

Boys track and field athletes from all of Ripley County’s schools joined a total of 13 teams at East Central High School on Thursday, May 16 for IHSAA sectional competition.

The Jac-Cen-Del Eagles had two athletes qualify for regional level competition, Damon Hughes in the 1600 meter run, and Garrett Boor in the high jump. Hughes was second overall in the 1600, finishing in a time of 4:45.15, six seconds behind the winner from Batesville, Joshua Myers, who ran in 4:39.55. Boor placed fourth in high jump, clearing a height of 5’10”.

The South Ripley Raiders had one athlete advance to regional competition, Mark Adams in the discus. Adams placed second in that event, throwing 127’6”.