Wanda English Burnett
Editor
Published in the Versailles Republican, May 28, 2020 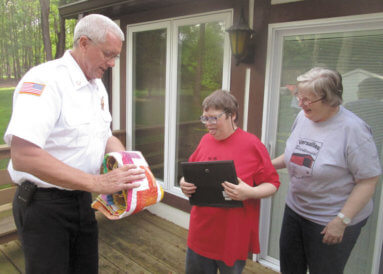 
Versailles Fire Chief Ben Sieverding presents Missy Ann a hero certificate along with a quilt after her heroic actions last week. Her mother, Judy Meinert is proud of her daughter.

“There’s no doubt I have an angel,” Judy Meinert commented, when she shared what happened to her last Thursday, May 21 at her own home in Versailles.

Meinert told The Versailles Republican she had been coming in and out of her back door and down just a couple of steps a few times that day when all of a sudden she stepped down and whoosh! She went through the sod and up to her waist in water. She would later find out it was believed to be the septic.

“When I first started falling, I pulled my knees up because I didn’t know how far down I could go. I didn’t even know the septic tank was there!” she exclaimed. She also noted that she spread her arms on the ground around her, but said as she screamed for help, she knew her arms would not support her for very long. She yelled for Missy Ann, her daughter. She said she finally put her knees down slowly and her foot touched something solid, like a bar. She then rested both feet on that as she held on for help to arrive.

Then her true angel and hero, daughter Missy Ann, came from the little wooded area behind their home in Rolling Hills and knew her mother was in trouble. Missy Ann, who is 50-years old, is multi-handicapped and non-verbal. At first she had some trouble understanding why her mother was so short, but knew she had to get help. “She’s truly the hero in this story,” Judy said. Missy Ann ran next door where Dee Dee Sorvino was visiting her mom, Nancy Daugherty. Dee Dee came immediately to help and called 911. She noted, “I pulled into my mom’s house. This little girl from next door who can’t speak, grabs me and takes me to her back yard…” Sorvino praised the all-volunteer fire department saying, “They are near and dear to my heart.”

“Our department was dispatched to 36 Rolling Hills for an elderly female who was trapped in a sewer tank,” noted Versailles Fire Chief Ben Sieverding. He said from the time they got on the scene until Judy was out of the tank, it was 18 minutes. Firefighters quickly set up the rescue tripod and rope rescue system. They placed a rescue sling around Judy and vertically lifted her up and out of the septic tank.

“I didn’t have any injuries,” Judy noted, admitting that her blood pressure was expectedly a little high from all the commotion.

It’s the first time the department has used the ropes for this type of rescue, the chief admitted, but said they have trained extensively and used them for other various types of rescue.

Judy said earlier that day she had trouble with a garage door and thought to herself, could this day get any worse? “I’ll never think that again,” she laughed as she and Missy Ann agreed that going down in the deep hole in the back yard was much worse.

On Tuesday, May 26, Versailles Fire Chief Ben Sieverding surprised Missy Ann with a Hero Certificate and a quilt from the Hoosier Hills Quilts for Kids for saving her mother. He also thanked the Rising Sun Regional Foundation for their support. He noted the specialty equipment used in the rescue was purchased with funds received through grants from the Foundation.

Without some volunteers and neighbors and Missy Ann, Judy’s outcome could have been drastic. Judy said she is thankful for everyone who had any part in helping her last week. She said she knows there are good people in the world and she’s happy to live where she does because of those people.

Judy concluded, “It just goes to show that people who have handicaps can still be heroes, and Missy is definitely mine.”