Move over. Slow down. 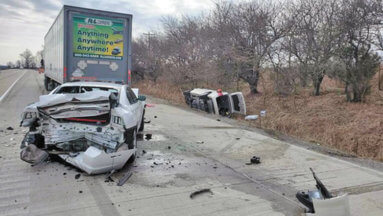 
The above photo shows what can happen when motorists ignore the Move Over. Slow Down. law. A motorist crashed into the back of the ISP car that was sitting behind the semi truck it had pulled over in Ripley County on I-74 near Batesville last Saturday. The motorist who struck the police car, then went on to crash landing on the right side in a ditch. Passengers in that vehicle were taken to the hospital with one child taken to Cincinnati Children’s Hospital.

It’s as simple as that. Move Over. Slow Down. That’s the law in Indiana when motorists come upon a vehicle with flashing lights on the side of the road, whether it be police, ambulance, fire, first responder, highway workers, etc. This act could have prevented what happened on Saturday, February 15 on the same stretch of road that took an officer’s life several years ago. ISP Trooper Andrew Winzenread was killed when he was helping a lady, whose vehicle was disabled on the side of the road, when a vehicle went past them, and struck his body, killing him instantly. That’s how the Move Over. Slow Down law was created – in his memory and for every other worker who has to be on the side of the roadway.

About 10:45 a.m. Master Trooper Daniel Elmore with the Indiana State Police – Versailles Post, had a semi-truck pulled over on I-74 in Ripley County near Batesville. According to Sgt. Stephen Wheeles, Trooper Elmore was conducting a traffic stop on a 2020 Peterbilt truck pulling a trailer, that was driven by Roger Gladden, 58, Mint Hill, North Carolina, near the 152 mile marker on I-74 Eastbound.

The trooper’s vehicle was clearly off the roadway, when it was struck by a 2012 Dodge Caravan, that was driven by Juan Martinez, 44, Chicago, Illinois. It was noted that Martinez left the eastbound lanes of I-74 and struck the rear of the police cruiser, which forced it into the back of the semi trailer. The Dodge Caravan left the south side of the roadway before overturning.

Trooper Elmore was out of his car when the crash occurred, talking with Gladden. Neither of them were hurt, nor was the driver of the Caravan. However, a six-year-old child in the Martinez vehicle was transported to Cincinnati Children’s Hospital and three others in the vehicle were taken to Margaret Mary Health in Batesville.

Sgt. Wheeles says the investigation is ongoing. Alcohol and drugs are not suspected to be factors in the crash although toxicology results are pending.

The Indiana State Police was assisted at the scene by Batesville Police Department, Batesville Fire and EMS, Ripley County EMS and the Sunman Fire Department and EMS.