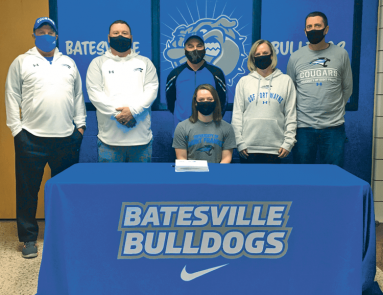 Rarely in the past few years has a Ripley County native signed on to play softball at the college level but Batesville senior Paige Oldham became the first in 2020 and officially signed her letter of intent to play at the University of Saint Francis this past week.

Oldham, the daughter of Paul and Lisa Oldham, signed her letter at Batesville High School with parents and coaches present.

Batesville was without a softball season a year ago but the Lady Bulldogs utilized Oldham throughout her freshman and sophomore campaigns. She appeared in 15 games her freshman year and was a full-time starter by her sophomore year where she batted .397 in 69 plate appearances. Oldham smacked 11 doubles that season and added 13 runs batted in and two home runs. In the field, she was second on the team with a .983 fielding percentage and committed just one error.

Saint Francis is located in Fort Wayne and plays in the NAIA ranks alongside fellow Indiana schools such as Marian, Taylor and Indiana Wesleyan. The Lady Cougars posted a winning record of 27-24 during the 2019 season but finished the shortened 2020 COVID campaign at just 4-11. The team has hovered around that .500 mark in recent years but has had 35 players in the last 15 years named to all-conference and all-tournament teams.

Ryan Bolyn is in his 16th season as the head coach at Saint Francis. Bolyn is the all-time winningest coach in program history with 209 wins.
Oldham is scheduled to kick off her senior softball season at Batesville on April 1 when the Lady Bulldogs host Rushville.