Published in the Osgood Journal, October 5, 2021 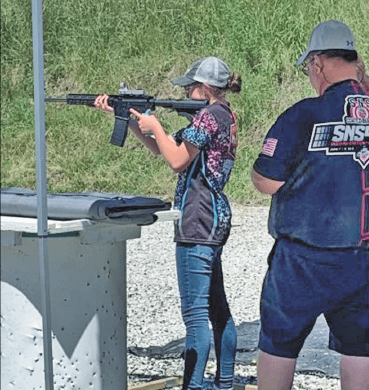 In the world of competitive shooting, Hanna Davies, 16, has managed to make a name for herself at a young age and she recently competed at the Conquest of the Midwest, a shooting competition located in Chesterton, Indiana.

Hanna became interested in the sport when she was eight-year-old. “My dad began exposing me to competitive shooting at the National Muzzle Loading Rifle Association competitions,” she explains. “At about the same time, the Versailles American Legion began their air rifle team. I was fortunate to be able to shoot competition with them for almost three years.”

Competitive shooting is very different from most other sports, like volleyball or basketball, a fact that Hanna readily acknowledges. “Shooting is largely an individual sport,” she states. “Nobody else can carry you if you’re having an off day. The sport also comes with huge responsibility to maintain gun safety at all times.”

Competitive shooting involved dedicating a significant amount of time and effort. “I have to practice quite a bit,” Hanna says. “Prior to this year we often practiced two to three times a week but with the new inflated cost of ammunition and poor availability, we [the shooting team] have reduced that.”

Hanna believes competitive shooting has helped her grow and mature into a more well-rounded person. “I was very shy when I began shooting sports. The world of competitive shooting has helped me break out of that shyness and communicate better with people who I didn’t previously know,” says Hanna. “Along with communication skills, hand eye coordination, and business skills, I am learning how to promote shooting sports throughout the state and locally.”

As a young woman, Hanna’s experiences have been overwhelmingly positive and welcoming. “Everyone involved in shooting sports wants to see more kids shooting, when they find out you’re a girl they really want you shooting! Competitively, there are divisions specifically for women and youth,” she elaborates. “That allowed me to be competitive from the moment I started in the sport.”

In August, Hanna competed in the Conquest of the Midwest. “The competition went great,” she says. “Although I didn’t shoot as well as I would have liked, I was able to support my fellow teammates who did very well.” The event was an important one for Hanna. “Our whole family looks forward to participating in it next year and hope to bring more of our teammates as well. The best part of the match was it was my first match officially sponsored by Tippmann Arms Co. out of Fort Wayne, Indiana. They are really good to my brother and I and keep our rifles in excellent shape.”

There are several other shooting events and organizations that Hanna is involved in, including the Laughery Valley Fish and Game Jr. Shooters Scholastic Action Shooting Program. “As a member of that program, “ she says, “I was able to shoot the Indiana State SASP match and the National SASP match in Marengo, OH, this summer. The national match was a huge event and a little intimidating. Our team did well for our first time at that level and we look forward to next year.”

To anyone wanting to get involved in competitive shooting, Hanna has some great advice. “Seek out a local club, Laughery Valley Fish and Game is a great choice, learn from those already shooting the sport and start competing. The shooting is so inviting and accepting of all experience levels.” Hanna also implores people to get training and education on what constitutes good gun safety. “There are lots of good programs and educational opportunities out there,” she says. “Some good sources of information online are the Indiana Rifle and Pistol Association, Indiana Youth Shooting Sports Foundation, Scholastic Shooting Sports and Steel Challenge Shooting Sports Association.”

Best of luck to Hanna in all her future competitions!