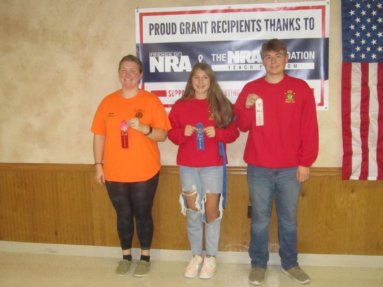 Versailles American Legion Post #173 junior shooting lost the bulk of a roster that made good on a plethora of state championships and national title match appearances after the spring of 2021 but perhaps a potential rebuild will in fact just be a reload after a near brand new squad dominated its season opener.

The #173 shooters went into familiar territory on Saturday afternoon, going on the road for a season-opening win at Jasper. Versailles posted a team score of 914-15 while the host Jasper group finished with an 826-6 score.

Inside four different shooting categories, Post #173 took the top spot in all four shoots and claimed all but three spots among top three finishers in each of the four. Gabe Block, a junior, had three first place finishes, winning the standing shoot with a 79, the kneeling shoot at 78-3 and winning the Top Gun category with an overall score of 245-6. The other win belonged to sister Anna Block who had a 93-5 in the prone shoot.

Gabe Block was also a third place finisher in the prone shoot at 88-3 while Anna Block was runner-up in the kneeling shoot at 76 while finishing third in the standing and top gun categories with scores of 67 and 236-5 respectively. Teammate Chris Couch shot a 75 and was third in the kneeling shoot. Jasper’s Abby Seitz was runner-up in three of the four categories which included the Top Gun category.

Post #173 heads back to the friendly confines of Friendship to prepare for a series of virtual matches and state matches inside the next three months.