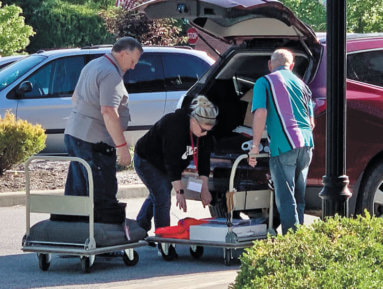 
Election board and poll workers unload the first votes arriving to the courthouse annex on Tuesday, June 2. Although it wasn’t a race to get there first, Washington Township 1 arrived the earliest. It was just a matter of time until more machines began rolling in. All 25 precincts had reported results by about 9:00 p.m.

Voters in Indiana joined Americans in seven other states plus Washington D.C. on Tuesday, June 6, for primary elections, or what is being dubbed “the first Super Tuesday of the COVID era.”

Ripley County Clerk Ginger Bradford and her team, along with poll workers stationed throughout the county, worked a marathon day to ensure smooth and safe operations this election season. Their efforts paid off as the county saw a strong turnout and organized proceedings through the day.

Bradford noted that absentee voting was higher than normal for this primary, likely due to the pandemic. In total, 4,746 votes were cast. That means 23.28 percent of Ripley County’s 20,390 registered voters participated.

Primary winners will now look forward to the general election to be held on Tuesday, November 3.