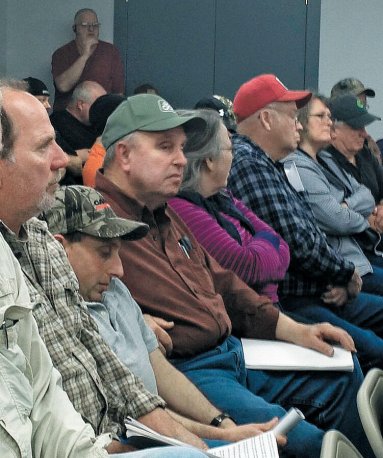 
It was another packed room as the second public hearing was held for the Fire Protection Territory that the Town of Versailles and Johnson Township is looking at entering into to partially fund the Versailles Volunteer Fire Department/Rescue.

The second of three meetings to establish a Fire Territory for the Versailles Fire & Rescue Department was held as scheduled on March 13 at the Versailles Town Hall with most of the seats filled. Those attending would hear from Chief Ben Sieverding, representatives for the Town of Versailles and Johnson Township, along with Paige Sansone with bakertilly, who recently joined with Umbaugh, an accounting firm from Indianapolis.

Steve Mathis, president of the Versailles Town Board, presided over the hearing again and asked for everyone to be respectful and told them everyone who wanted to say something would get the chance at the end of the presentations. He was true to his word with the meeting lasting approximately two and a half hours.

Chief Sieverding brought information as requested from some citizens from the last meeting that dealt more with his budget. He broke down the numbers of calls for 2018 so people could see exactly what type of calls the volunteers responded to. There were a large number of “first responder” calls, 326. Andi Richter, who was in the crowd, questioned why the fire department was making so many EMS or first resopnsecalls.

Mathis noted that he had spoken with a commissioner and was advised that the town and township didn’t want firefighters to stop doing first response.  Sieverding said the first response part of their job as a firefighter is the one thing that costs the least. “They (firefighter/first responders) go in their own vehicle with little cost to the fire department.”

Rick Stevens, said he used to be the captain of Milan Rescue 30. He boldly told those who questioned the need for first responders that they are the ones who get there the quickest. Then the rescue squad comes. He noted that many lives have been saved due to first responders.

Versailles board member Roxanne Meyer noted “EMS (first response) was part of the firemen’s job”. She noted that she had completed some research about the taxes and Versailles was the third lowest town in the county for paying property taxes.  She gave the population of Versailles as 2,326.

Sansone gave her report, which was altered from the first meeting. It was a good thing because the amount property taxpayers would have to pay went down substantially. She noted that they were figuring ambulance service in the first report, and later learned that was not needed. The estimated taxing districting rate impact was explained. For property taxpayers in the town the first year could see a 5.3% increase. “Take your taxes and multiply that bottom number you paid last year by 1.053, and that will be the amount you could pay,” she noted. For Johnson Township property taxpayers it would be bottom number of taxes times 1.08,” She said the second year it should go down and then even out. A 41-page document was given to everyone who attended the meeting.

Those who own a lot of property, rental, agricultural, etc. might have to pay the most. Some of those people were in the audience and spoke out against the proposal.

Chief Sieverding assured those who questioned him about wanting a paid position with the fire department that he had no plans for that to ever happen. “We are blessed to have 29 great volunteers,” he noted, adding that they were happy to serve without pay.

When questioned about how much Umbaugh was being paid and who paid that bill, Sansone said the fire department contacted them. She assured the crowd that her company would not be adding any additional costs as time went on, with the initial $20,000 being the cost. Mathis noted that the town and the township were sharing that cost.

Mathis told the crowd, who would get loud at times, that everyone would have the opportunity to speak.  “It’s not a done deal,” he noted. He also said, “This is all about transparency.” He said he had many phone calls since the first meeting and had tried to honestly answer each one.

Probably one of the most peaceful times of the evening was when Bob Brewington spoke about everybody taking it down a notch, slowing down the process and everyone working together, to which he received a round of applause. He said he wasn’t for more taxes. He also praised the local fire departments and said in a recent situation where he lost his son in a house fire, four different departments came together. He said he had written a letter that was published in the local newspaper thanking them for all they meant to his family in a time of need.

Many legitimate questions were asked and answered. Some questions seemed to be  attacks on the Versailles Fire Department and really had no relevance to the task at hand.

One last meeting will be held at the Versailles Town Hall on March 26 at 7:00 p.m. after which a public vote will be taking place. The results will be posted on the town hall door. The meeting is open to all. The voting will be done in a public venue. All who will be voting were at the meeting on Wednesday with the exception of Dennis Sanders who was in the hospital. It was explained that the township trustee, who is Toni Halcomb, is not allowed to vote in the matter by statute. The Johnson Township Advisory Board consists of: Carrie McNew, Dennis Sanders, and Marilyn Hunt. The Versailles Town Board members who will be voting are: Steve Mathis, Matt McNew, and Roxanne Meyers.

A lot of the misunderstandings about the process seemed to surround the Indiana statutes and exactly what was allowed by law. Some people seemed to be misinformed and blamed that on the town board, township and fire department. When in fact, the statute states how the procedure works. It is to be published in a legal notice in a relevant paper. That was done. While some thought it should be done a different way, it was handled according to Indiana Codes.

CORRECTION: In a story printed last week entitled “Versailles Town Board says they’re following the law” in last week’s Verssailles Republican, the name should have been Jim Busteen instead of John Busteed. We apologize for the error.