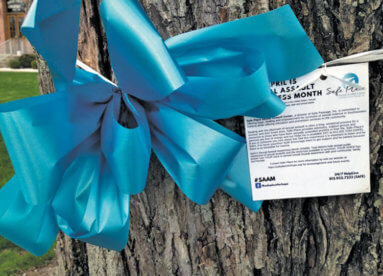 
Teal colored ribbons were placed around some of the trees at the Ripley County Courthouse to remind everyone to be aware of domestic and sexual violence against woman. Seventy percent of these types of crimes are not committed by a stranger, but rather an acquaintance.

As the Me Too movement spread like wildfire on a large screen and virally throughout the nation, some people wondered what it was all about and others knew exactly because they are part of the movement.

As a prosecutor, Ric Hertel knows the impact of Me Too is imperative for his office to be in tune. When a board member of Crimes Against Women, an annual conference in Dallas, TX, contacted Hertel and asked him to submit information to possibly be a speaker, he was honored.  “I know it’s a rigorous process of who they ask to speak at this event,” he told the Osgood Journal.  He submitted his presentation, The Kavanaugh Effect, and was selected to speak at the conference, which was presented by the Dallas Police Department and Genesis Women’s Shelter & Support, April 8-11.

With April being designated as sexual violence awareness month, he accepted the invitation knowing he would come away with knowledge by hearing others speak. He asked some of his friends and colleagues, “When you hear the words ‘me too’ what comes to mind?” Armed with the knowledge that some people think it’s nonsense, to those who fully believe it’s happening, he knows the perception people have is relevant. In his line of work, perception has no place, but rather forensic science and evidence are the best tools. But, sometimes, the evidence is gone forever without a report of any kind. Then what?

When Supreme Court Justice Bret Kavanaugh was accused of inappropriate sexual behavior in his college years many years after he attended college, Hertel began to look into the situation and what it would mean to prosecutorial situations in the future. He wrote, “Liberal or conservative, Democrat or Republican, the nomination process of Supreme Court Justice Bret Kavanaugh has had and will have a significant impact on sex crimes prosecutions through this country.”

Hertel noted, “The divisive nature of the proceedings, the use of a sex crimes prosecutor by the Senate Judiciary, and the victim’s delayed report has caused wariness and skepticism in the general public. How prosecutors talk to jurors, uncover any juror bias and generally present evidence must factor into these proceedings.”

When presenting at the conference, Hertel noted that the spotlight brought to the #Me Too movement by Harvey Weinstein, Bill Cosby, and Kavanaugh makes a difference in handling such matters by the criminal justice system and beyond. He spoke on how the allegations on investigations, charging, pre-trial preparation and trying these cases could be different based on the movement. His presentation was entitled, The Kavanaugh Effect.  What do people really think?

The prosecutor noted that his office has the burden not only to believe the victim, but, to present their case in a criminal court of law. “We do not condone inappropriate behavior in any form, but can we prove it is criminal?” That’s the question when there might not be much evidence, if any.

“We have to make sure that women, and men for that matter, are willing to come forward and talk about sex crimes,” Hertel said. He reported that 70% of these types of crimes are committed by an acquaintance. Sixty percent of people think it’s a stranger, but that’s not what statistics prove.

Hertel noted,“It’s easier now for the victim to report a rape than it was 20 years ago and more light has been shed on the crime.” However, he said that rape is still the most under reported crime in the country. Ultimately women are in the shadows of sexual assault and domestic violence. Some of the victims think if they report the abuse or rape, the father of their children will be taken away or they can’t put the guy they love in jail.

The original Me Too movement was founded in 2006 by Tarana Burke. She was at a camp when a young girl came to her and told her story. As Burke sent the girl to speak to the appropriate person, she said to herself, “Me Too”. However the phrase only began to spread virally in 2017 and has developed into a broader movement.

The keynote speaker for the conference on Crimes Against Woman was Kristen Gibbons Feden, who served as Special Prosecutor in Commonwealth vs. Cosby in 2017 and again in his 2018 retrial, where a conviction of three counts of sexual assault was brought against the comedian who was known as “America’s Dad”. Cosby shows were popular with Bill being the star of the show that saw comedic action with never a hint of impropriety.

Feden led the Domestic Violence Sex Crimes Unit in the Montgomery County District Attorney’s Office at the time of the prosecution of Cosby.  As part of her daily schedule, she investigated and prosecuted cases of child and elder abuse and neglect, rape, sexual violence, Internet crimes against children, financial exploitation against elders and homicides. She has several accolades in her career, the most recent when she received the Victim Rights Law Center Leadership Award in September of 2018.

“Every case is as unique as the victim and the defendant,” Hertel concluded.