Puppies rescued from the cold 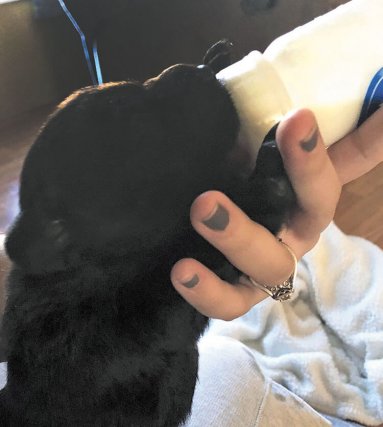 
Lindsey is feeding one of the puppies, and he was sure enjoying the meal. She said she doesn’t know how anyone can be so cruel as to just throw the puppies out.

Who would leave two-week old puppies out in the cold? That’s the question Lindsey Brunner of Rexville, would like to know.

Lindsey was driving in the area of 400 S., Versailles, last Friday, November 8 around midnight when she heard something crying. Her heart skipped a beat as she began to follow the cries and found three puppies near a creek who were shivering, cold, wet, and scared. “It was 11 degrees that night, I looked on the thermometer!”, she exclaimed also saying, “I can’t believe someone would ditch these helpless little babies. They were just scattered about like someone just threw them out the window. It was so sad.” She took them in and began bottle-feeding them. “They barely had their eyes open,” Lindsey said, knowing they would have died that night if she hadn’t intervened. “They fit in my hand,” she said, noting their size.

Then the story takes another twist. Lindsey found out there were three more puppies found within a five mile radius – same size and breed, earlier on Friday by an Amish family in the area. She put her story on Facebook and soon knew that Tammy Harrison also had one puppy she said she found by her house in a ditch that she was planning to keep. “That’s seven babies just left to die,” Lindsey said.

“I looked and looked for the mother dog, fearing that she was hurt or abandoned too,” Lindsey said, but she couldn’t find her. The Amish family gave the three puppies they found to Lindsey and she had her hands full for a few days bottle-feeding them around the clock with puppy formula. A friend is helping her with three of them now, but it’s quite an ordeal. “It’s just like feeding a newborn baby,” Lindsey noted.

She gets her supplies for the puppies from the Versailles Farm & Garden store. Lindsey said if anyone wants to donate puppy pads or formula, which is all she really needs right now, the items are available at the store. She goes there frequently and will pick up any donations. She said she might also set up a GoFundMe page on Facebook if anyone wants to donate toward the upkeep of the puppies until they go into permanent homes. She will also have to take them to the vet for shots. She has already secured homes for all six of them when they are ready to be on their own.

She has a one-year-old, River Scott, who has really been enjoying having the puppies at his house. “He’s used to animals, I’m always rescuing something!”, she laughed, saying she has taken in kittens and puppies before. She has horses, chickens, etc. “This is what I do,” she said, “I take care of animals and I love it.” She is in the process of starting up a business, Graham Creek Hound & Pet Supplies. Lindsey said she has been shipping reflective leads and collars to pet owners.

The 10-year 4-H member just loves animals. Being able to sell leads and collars to pet owners so their pets can be seen at night is comforting to her. She is passionate about how animals are cared for. In the meantime, if anyone knows who did this to the puppies, she wants them to call the police or let her know. “I want this person to know it’s cruel to leave babies to die.” She also said she is thankful she found them, along with others. “God has had his hand on these puppies. They are blessed,” Lindsey concluded.

Anyone with information or wanting to help with donations can contact Lindsey on Facebook or call her at 812-621-2928.