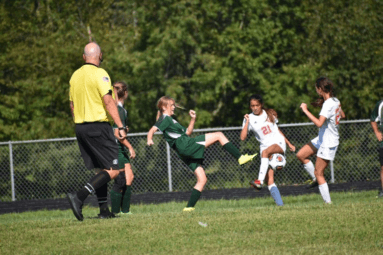 
South Ripley’s Kylie Betz fights for possession against a pair of Madison players on Monday night. Madison won the match 3-0.

Amid uncertainty in regards to the duration of the fall sports season due to an ongoing pandemic, South Ripley soccer celebrated Senior Night on Monday against a pair of Jefferson County schools.

The boys match saw South Ripley score big in the first half with four goals and pick up its first Ohio River Valley Conference win of the season, beating Southwestern (Hanover) 5-1.

Junior Zach Gentile continued his sizzling start on offense, posting his third hat trick of the season with three goals and adding an assist. Gentile now has nine goals on the year and is currently on pace to threaten the program record for most goals in a season which was set in 2003 by Chris Buchanan with 31.

Dillon Binion scored his fifth goal of the season and Ben Miller posted his fourth goal of the year. Miller led the Raiders with two assists and Bryan Carpenter chipped in an assist. Goalkeeper Brycten Tingle recorded four saves in the net.

¨It was a good game from both teams,¨ South Ripley head coach Nathan Hensley said. ¨The boys worked hard all game and were producing quality chances. We did a great job limiting their (Southwestern) chances considering Southwestern had good ball movement.¨

South Ripley (2-3, 1-1 ORVC) traveled to Shawe on Wednesday for an ORVC match and continues its conference road schedule when they visit Switzerland County on Tuesday.

The girls match saw Madison play spoiler on Senior Night and leave Versailles with a 3-0 win over South Ripley.

Madison took advantage of a South Ripley offense still trying to find the back of the net early in the season and the Lady Cubs stood tall on defense and did enough offensively for their second win of the year.