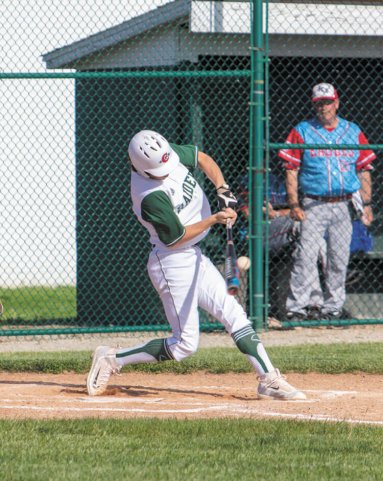 
Raiders sophomore Bryce Franklin connected with a pitch in the bottom of the third inning and sent it over the left field fence for a two-run home run.

The South Ripley Raiders hosted their rivals the Jac-Cen-Del Eagles in Versailles for an Ohio River Valley Conference game on Monday, May 6.

The game was primarily a pitching duel, as South Ripley’s Bryce Franklin and Jac-Cen-Del’s Logan Drockelman both pitched the entire game.

As Raiders Assistant Coach Jeff Greiwe wrote, “Franklin dazzled on the mound,” en route to a no-hitter. Franklin struck out 14 batters with only one walk and one hit-by-pitch for the game.

Although Drockelman took the loss, he still pitched a strong game, striking out seven, while giving up four hits and three earned runs.

The Raiders bested the Eagles 2-0 in head-to-head matchups this season. The green and white team’s first win came on April 10 by a score of 10-2.