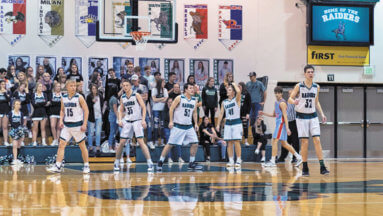 
All five of South Ripley’s seniors enjoyed playing together at the same time in the fourth quarter. From left is Connor McCarty, Sam Evans, Dakota Day, Eric Vickers, and Cory Ralston. Each young man received warm applause from the crowd upon exiting the game.

The South Ripley Raiders boys varsity basketball team unleashed a thunderstorm of three-pointers on the visiting Jac-Cen-Del Eagles on Friday, February 28 in Versailles, leading to a home team victory 74-65. It was the final regular season game for both teams.

South Ripley’s Aaron Greiwe began the game with two of the long shots in a row. By the end of the first quarter, five different Raiders had hit a three-pointer, and by the final horn, seven had nailed at least one, for a team total of 12 on the game. Nine total Raiders players scored during the game.

The Eagles, known for their long range ability this year, also shot well. Five different players hit a three point shot, for a total of nine on the night, but the Eagles just couldn’t match the hard-charging offense of the Raiders.

After opening the game with two straight scores, SR’s Greiwe went on to score 11 points total on the quarter, leading his squad to a 27-13 lead. By halftime, the lead swelled to 44-26, and after three quarters it was 60-37.

Jac-Cen-Del nearly doubled their scoring in the fourth quarter to end the game with 64, but it was “too little, too late” as the Raiders cruised to their 14th victory of the year.

South Ripley senior Greiwe led his team with 15 points on the game, a fitting statistic as it was his school’s Senior Night. JCD junior Christian Comer led his squad with 15 also, thanks to three long balls, two field goals, and two free throws.

In addition to their strong offense, the Raiders defense should also be commended. SR disrupted the Eagles offense early and ultimately held JCD’s big man, senior Justin Baber, to only one point on the game.

South Ripley finishes their season with a winning record, 14-8. Their final win brought their Ohio River Valley Conference record to 5-1, good for second place among six teams. It was also their second win over JCD, ending the season rivalry at 2-1 over the Eagles.

Both teams are now focused on sectional competition. South Ripley opens among local teams with a game tonight against the 21-2 South Decatur Cougars. Like the Raiders, the Cougars finished their season with authority, winning 109-47 over Knightstown on Friday night.

South Ripley and South Decatur met once during the regular season, a game the Cougars eked out in overtime, 76-75, in Versailles on December 21. Tipoff is scheduled for 6:30 p.m. at North Decatur High School.

The Eagles open sectional play tomorrow, Wednesday, March 3 against Southwestern (Shelbyville), at Southwestern’s high school. The Spartans are 15-8 on the year. JCD won the only regular season matchup between the two teams, 79-71 on February 11. That game is set for 6:00 p.m.