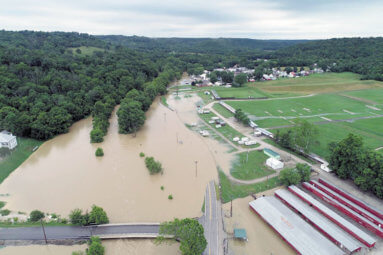 
Pictured above the rain came in such torrents over the weekend, that people had to quickly move out of areas at the National Muzzle Loading Rifle Association’s Spring Shoot and Flea Market in Friendship. State Road 62 was covered in places as Laughery Valley’s banks overflowed.

The rain came down – and the floods came up!

A familiar song children used to sing, and maybe still do, has more meaning in Ripley County after a deluge of rain pounded the area over the weekend causing  streams and creeks to flow out of their banks.

According to information from the Ripley County Emergency Management Agency’s Matt Chastain, the water level on Sunday, June 16 in Friendship was at 11.2’ and rising rapidly. He noted that in the time it took him to film a 20-minute video of the flooding, he had to move his vehicle from the rising water.

There were flash flood warnings out from Saturday, June 15, with more warnings of thunderstorms for Ripley County until 3:00 p.m. on Monday, June 17 from the National Weather Service out of Wilmington, OH.

Saturday evening many people in Ripley County began getting alerts on their cellular phones to be on the lookout for possible tornadoes. One was spotted in Jennings County and it was predicted to travel due east into Ripley County and up US 50.

Television stations from Indianapolis and Cincinnati both warned people to “be in their safe place” for a large portion of the evening on Saturday as the storms raged overhead. Chastain noted that thunderstorms took out a transformer at 175 W. and US 50 causing people to be without electricity for some of the storm event.  Some people in the Hopewell area took to Facebook saying they were without power.

Area farmers who do not have their crops in are looking at other options, with the possibility of not getting anything planted in some of the low lying areas of the county due to the massive amounts of rain that already have the area saturated. The forecast calls for more rain this week, with a possible break on Friday, June 21.