Wanda English Burnett
Editor
Published in the Osgood Journal, May 4, 2021 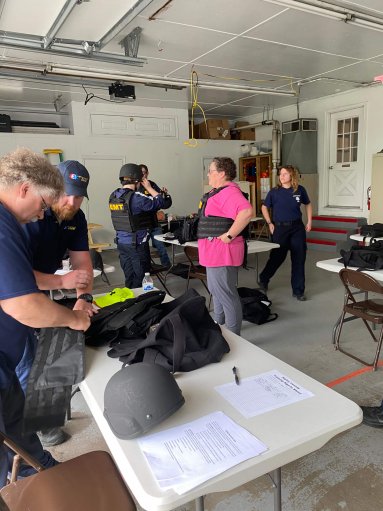 
Pictured above paramedics and EMT’s from Ripley County Emergency Medical Services, were checking out some new gear they will be wearing in certain circumstances. The kit bags include plated vests, helmets and protective eyewear.

Taking on a layer of protection that is mostly reserved for police or combat, is now the normal for Ripley County EMT’s and Paramedics in certain situations.

Matt Mize, a five-year-paramedic with Ripley County, has training far beyond those years and brings first hand knowledge of wearing the armour that will protect the lives of EMS personnel who serve in this county.

Mize, who was in the military and also served as a Tactical Medic in civilian life, taught the classes recently for Ripley County EMS. “We’re fortunate to have him,” noted Scott Huffman, who is the director of EMS. He said Mize has been in situations that are becoming more rampant in this county, and is thankful to have someone with his expertise teaching the class.

Medics and EMT’s gathered last week for training where they received a bag of gear that included vests with plates, a helmet and protective eyewear. Each of the attendees learned how to put the gear on, and be ready quickly for whatever comes their way.

“We’ve had the gear since the first of the year,” Huffman told the Osgood Journal. He also noted that they used it within the first week of its arrival. When do EMS personnel use the armour? Of course they would wear it if there was a mass casualty situation such as a shooting. However, on a daily basis they respond to assault, domestic and overdose situations, which can escalate quickly. Mostly, police officers are there to help when that happens, but there’s always a chance they could be hurt, even killed.

When teaching the class, Mize went over the Aurora, Colorado, Theater shooting incident. Using that as a tool for changing what went wrong, students quickly learned what they do on a routine basis would change drastically if the situation was a mass casualty. Mize drove home that their safety is paramount and also working with the police, or other emergency personnel on the scene. “These scenes are not safe, use your head,” he stressed. “You will be uncomfortable because it’s a different way of taking care of patients,” he told the class. He noted that bleeding out is the biggest threat in these situations and taught the class what to do. Huffman explained that Ripley County medics will have a new medicine – TXA. This prevents the body from breaking down blood clots, which is very useful in a car crash for example. This keeps the patient from bleeding to death. “We will have TXA on all our buses (ambulances)” noted Huffman.

The class left with the words of the instructor, “you will always sink to the level of your training”. That’s why the importance of training, training, training, is put in the forefront of what they do. Mize told them to get their heart rate up and then see the difference in getting an IV in someone. “Because your rate will be up in a mass shooting,” he warned. Mize taught the class with the passion of someone who has been in the field and has seen situations where people die, because he has. He knows first hand what it means to be a medic in a combat situation and wants everyone around him to be prepared.

Huffman said he is proud of the group, the instructor, and truly thankful to the Rising Sun Regional Foundation for funding this effort to get the gear needed. “I really appreciate their willingness to talk with us, and understand what we needed, and then granting the money,” he told the Osgood Journal.