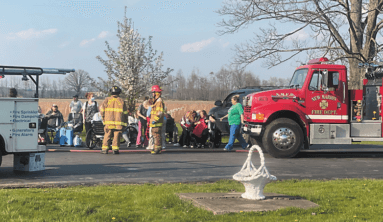 
Residents of Silver Memories were quickly taken to safety after a fire alarm went off with smoke in the building. There were no injuries as staff and others worked to complete a safe transfer of the residents to other facilities.

Three fire departments rushed to the scene when the call for help came in for an active fire alarm with smoke at Silver Memories south of Versailles. The long-term care facility is home to 25 residents who were all evacuated safely.

Three more fire departments went on standby, with a variety of agencies offering assistance and coming to the aid of those at the facility.

According to Versailles Chief Ben Sieverding, the fire was contained to the attic area of the structure and there were no injuries.

Departments on the scene included: Versailles, New Marion, and Osgood. Others who were on standby included: Napoleon, Friendship and Milan.

Manderley Nursing Home and South Ripley Schools helped with handicap accessible buses to provide additional transportation for residents who were housed at other facilities.

Editor’s Note: We reached out to the administration at Silver Memories but had not heard back as of press time.