Published in the Osgood Journal, September 21, 2021 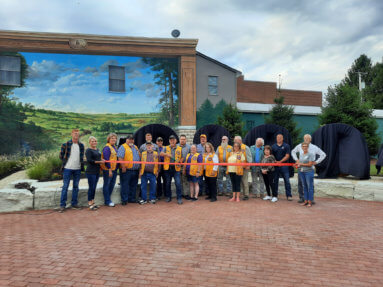 
TOP PHOTO: Alesha Neal, pictured second to left, along with Tina Lynch, pictured second from right, from the Ripley County Chamber of Commerce were on hand to help with the Ribbon Cutting for the new park in Osgood on September 11. Also pictured are members of the Osgood Lions Club, the Paynes - Gary, Caleb and Dustin, and Jake Goodwin and crew. Pictured above, a good crowd gathered on a Saturday morning early to take part in the ribbon cutting and dedication of the new park in Osgood that is complete with spacious landscaping, a mural, and buffalo - with over 5’ letters spelling out the town’s name.

The transformation of the former mini park in Osgood has been going on for a few weeks, and everyone driving by has been noticing the flurry of activity there on Buckeye Street. On September 11 the Osgood Lions Mini Park held its ribbon cutting and unveiling of the O.S.G.O.O.D. letters that were specially designed by Gary, Caleb and Dustin Payne of Iron Timbers, located just around the corner from the park.

Dustin told the Osgood Journal they initiated this idea first to the Gilmore & Golda Reynolds Foundation Board and have raised enough money through fundraisers and grants. IHCDA (Indiana Housing Committee Development Association) gave a matching grant of $35,000 for the project. Valley Interior Systems resurfaced the outer wall where the mural was painted and illustrated by Robert Dafford and assistant, Miguel LaSala from Lafayette, Louisiana, who are known for their work on murals throughout the country.

Nancie Scott Davis of Osgood, donated her time and artistic talent to create the buffalo detail on the massive structure located in the park.

Iron Timbers created the woodworking and designed the giant letters that spell the town – Osgood. Hank Brim of Majestic Electric Co. completed the electrical work. Jake Goodwin with Goodwin Landscaping, along with his crew – Sam, Adam and Connor – did the landscaping creativity of the project. “Thanks for letting me put a twist on your park,” noted Jake.

Dustin Payne of Iron Timbers wanted to give a special thanks to the Town of Osgood, Reynolds Foundation, Osgood Lions Club, Osgood Beautification and other local businesses who made the project possible.

If you would like to be a part of this project, you can get an engraved brick, according to Owen Menchhofer. To have your own brick you simply donate $100 by contacting Menchhofer at 812-756-0160 with the checks payable to OBC (Osgood Beautification Committee). Money raised through this will be used for maintenance at the park.