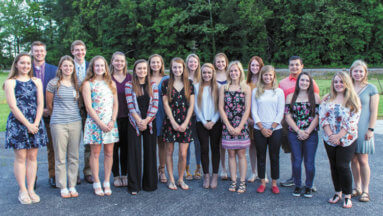 
Ripley County Community Foundation (RCCF) scholarship recipients from the 2018-19 school year gathered for a photo after the foundation’s annual meeting. RCCF Board Member Jim Black shared that in 2018, 65 scholarships were awarded from 37 different funds which totaled over $70,000 dollars. Black emphasized the importance of the support from donors who established scholarship funds that made these gifts to students possible.
While addressing the crowd during the annual meeting, 2018 Lilly Scholar recipient Toria Tucker, a graduate of South Ripley, gave advice to this year’s graduating class: “Work ethic wins every time.” Tucker thanked the foundation for their support and shared that she earned 39 credits during her first year at DePauw University while maintaining a 4.0 GPA. “I would not be where I am if it weren’t for the extremely generous Lilly Scholarship,” she said.

“2018 was a very successful and progressive year for the Ripley County Community Foundation,” Board President Steve Huff told those in attendance at the foundation’s Annual Meeting held on June 18, 2019 in Sunman. Huff shared that nine new funds were created last year, adding to the over 170 permanent funds that “will pay dividends perpetually for the county.”

In all, the Ripley County Community Foundation (RCCF) granted $385,000 for the year 2018. Slightly over half of this dollar amount was through fund distributions, while the rest was given through large and small grants, Impact grants, Ripley Youth Outreach grants, Proactive grants and sponsorships, scholarships, and through the Genesis: Pathways to Success initiative. As of December 31, 2018, the RCCF reported total net assets just shy of $11.5 million.

“We try to [support] all areas of the county and all walks of life the best we can,” Huff continued, referencing the fact that of all grant money given in 2018, it supported 117 different non-profit organizations which were working on 162 different projects in the county. Huff gave a few examples of where grant dollars went:

– The RCCF board approved a three-year commitment to the Rural Alliance for the Arts, which in part will help bring the Indianapolis Symphony Orchestra back to Gillespie Soccer Park in Batesville this year. Dollars were also distributed to support an arts project in a Batesville alley and for the Versailles mural.

– The Holton Fire Depart ment received a large grant to support the building of its new firehouse.

– Southeastern Voices for Children received funds to continue their work with the county’s abused and neglected children. With RCCF grants, the group was able to recruit and train 29 new volunteers who are currently serving 79 children.

Huff concluded his remarks by sharing about the Lilly Endowment’s Giving Indiana Funds for Tomorrow program. Through this program, the Lilly Endowment has pledged a gift of $500,000 to the RCCF. Happening now, for every $1 donated to RCCF, the Lilly Endowment will match with a $2 donation, up to the half-million dollar cap. As Huff stated, “This is the time to donate” to make dollars go further for RCCF support.