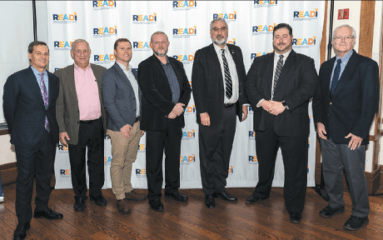 Southeast Indiana’s six-county regional collaborative has been awarded $15 million by Governor Eric Holcomb and the Indiana Economic Development Corporation through the READI program.

Gov. Holcomb and Secretary of Commerce Brad Chambers announced $500 million in awards to 17 regions covering all 92 Indiana counties during the IEDC Board of Directors meeting at Butler University in Indianapolis on Tuesday, December 14. READI, or the Regional Economic Acceleration and Development Initiative, was announced earlier this year once the General Assembly allocated funds for the program with the goal of boosting Indiana’s talent attraction, quality of place, and entrepreneurship environments.

“The seventeen regions submitted innovative, creative and visionary projects that will result in a positive economic impact on Indiana’s future,” said Gov. Holcomb. “It took immense collaboration between communities as they put aside their own visions and worked together to present the best plan for the region. These plans will shape Indiana for generations to come and bring value to our state like nothing we’ve witnessed before. I want to thank the general assembly for having the courage and leadership to prioritize this initiative.”

The READI funds awarded to Southeast Indiana will be administered locally by a new non-profit organization called SEI READI, Inc. The 501(c)3 organization will be managed by a board of directors comprised of private sector business leaders from each of the region’s six counties. In collaboration with the IEDC and project stakeholders, SEI READI, Inc. will prioritize projects best situated to ensure the talent attraction and economic development goals of the region and the READI program come to fruition.

“It is truly an exciting time for Southeast Indiana. The READI program will catalyze projects which will build upon our upward trajectory. On behalf of our region’s cities, towns, counties, businesses and philanthropic organizations, thank you to Gov. Holcomb, the General Assembly, and the Indiana Economic Development Corporation for the amazing READI opportunity,” said Gary Norman, president of the Southeast Indiana Growth Alliance.

It is expected that READI funding will be available to selected Southeast Indiana projects starting in 2022.

“We’ve been impressed by their hard work and commitment to positively impacting the state,” said Sec. Chambers. “Thank you also to the citizen-members of the external review committee for their diligent work in meticulously reviewing thousands of pages of proposals. This bold initiative sets the national standard for regional development and advancement and will build even more momentum as Indiana continues to lead.”