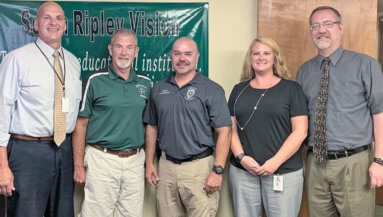 Town of Versailles Deputy Marshal Eddie Rodriguez was named as South Ripley’s new school resource officer at the school board’s August 19 meeting. The announcement came from Superintendent Rob Moorhead just after the board voted unanimously to approve a Memorandum of Understanding between the Versailles Town Council and the South Ripley Corporation. The approval of that memorandum means that Rodriguez will remain an employee of the Town of Versailles and provide contracted services to South Ripley and the Southeastern Career Center. This is similar to prior agreements between the town and school.

“We are very pleased to have Officer Rodriguez joining us as our new SRO,” said Moorhead. He extended appreciation to the Town of Versailles for continuing their partnership and called it a win-win for both the town and school. “I know Officer Rodriguez is going to be a great fit in this position. We are looking forward to getting him started and welcoming him to the South Ripley family,” Moorhead continued.

An additional memorandum was approved between South Ripley and the Career Center for the purpose of establishing an agreement regarding the use of school corporation transportation in the case of an emergency. This agreement is renewed annually. The board was also informed that annual school safety plans for the elementary, junior high, and high schools have been revised for the current school year.

The South Ripley Board of School Trustees had a substantial agenda for their August meeting. Prior to the regular meeting, a work session for the proposed 2020 budget was held. An executive session followed that to receive information about prospective employees and discuss job performance evaluation of individual employees. Following the executive session, a required public collective bargaining hearing was held in accordance with Indiana code. No public comments were made, so that hearing was brief.

All board members as well as Supt. Moorhead and school attorney Merritt Alcorn were present for the regular meeting. The agenda, last month’s minutes, claims, and the financial report were all approved.

The following items were rendered obsolete with a vote from the board: ten pieces of weight room equipment that are damaged beyond repair, two washing machines, one dryer, one oven, and a 1989 Ford box truck. Additionally, some old playground equipment that has been replaced thanks to a Tyson Fund grant was approved to be scrapped.

Additional action items approved included: The purchase of a new 2019 Chevy Collins 14 passenger bus through Midwest Transit at a cost of $66,239; an overnight field trip to Batesville High School for students and staff participating in the “24 hour plays” from September 20-21; an addendum to elementary and junior high school handbooks to implement a “Peanut Aware” environment that will replace “Peanut Safe” language currently used at the elementary; authority for Supt. Moorhead to advertise the 2020 proposed budgets; and an addendum to a land purchase agreement for property located on SR129 due to the survey containing more acreage than originally defined. Supt. Moorhead thanked Attorney Alcorn for his legal counsel throughout the land purchase process.

Under information, Supt. Moorhead was pleased to announce that the Indiana Rural Health Association is donating $500 to South Ripley for use in the schools’ telehealth clinics. A final 2018 Impact Aid payment was also received by the school in early August for $1,812.

The first reading of the updated teacher appreciation grant policy was distributed to board members and the SRCTA president for review. Adoption of the policy will take place at an upcoming meeting.

Supt. Moorhead shared a letter with the board from Andrew Melin, Chief Innovation Officer at the Indiana Department of Education, extending an invitation to Moorhead to participate in the inaugural IDOE Superintendent Collaborative. Moorhead accepted the invitation and said that he is looking forward to the opportunity to take part in the first ever Superintendent Collaborative.

Member Lori Samples stated that she met with the principals from each of SR’s schools recently and toured the buildings as a part of her new board member orientation. She said that she enjoyed seeing what was going on in the schools and appreciated the passion of SR teachers to help students.

With no further business, the meeting adjourned. An additional board meeting will be held to conduct personnel business and interview RFQ respondents on September 9 at 6:00 p.m. at SRES. In addition to that session, a short regular meeting will be held to complete needed hiring. A budget hearing is also slated for September 16 at 6:30 p.m., and the budget adoption will follow during the regular session in October.