Salute to South Ripley’s top of the class of 2020 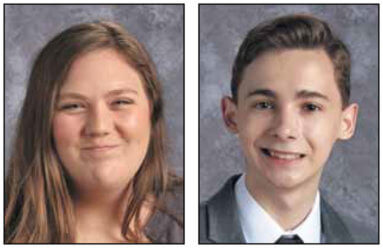 South Ripley High School announced recently that Emma Wood and Andrew Conrad are the valedictorian and salutation for the Class of 2020.

Valedictorian Emma Wood is the daughter of Tony and Laurie Wood. She plans to attend IU Southeast and focus in areas of science regarding genetics or environmental science.

Wood was involved in many extracurricular activities, including the SRHS Choir, Drama Club, Academic Team, and the varsity swim team. She also served as a staff member at church camp during her summers.

Wood says all of her teachers impacted her in one way or another, but says Mr. Max Howard “helped me discover my passion for science and pointed me in the right direction regarding my future and potential careers I might want to pursue.” She also expressed gratitude to Mrs. Lindsey Seabolt, saying she “was always there to help me out and give me the motivation I needed to get things done.”

Outside of school, Wood likes to write. She hopes that one day she will have the opportunity to publish a book.

Wood’s advice for next year’s seniors? “Get educated. Not only in school, but outside of it, too.” She expresses concern that close-mindedness contributes to many problems in our world, and people should put in the effort to get involved and help others instead of adding to the problems. Regarding the senior school year specifically, Wood says, “Enjoy every day of your senior year and savor it…Good luck, Class of 2021!” Salutatorian Andrew Conrad is the son of Glen Snyder and Diana Conrad. He plans to attend Hanover College and major in graphic design.

Conrad was involved in Art Club during his high school career. “We did all kinds of fun things,” in the club, he said. Among many activities, he helped paint a mural in the school library.

Conrad credits art teacher Mr. Matthew Gadberry as his most influential teacher. “While I definitely had the fuse to pursue art, he helped me find the spark to ignite it and finally start working towards it as a set of future plans. Without his motivation, I don’t think I would be where I am today.”

Outside of school Conrad enjoys hanging out and relaxing with his friends. He also enjoys painting, building computers, and following politics and music.

Conrad tells next year’s seniors to find the balance between achieving tasks and goals, but not mentally straining too much. “I would have to say the biggest thing is to do things comfortably and the way that works for you (within reason, of course).”