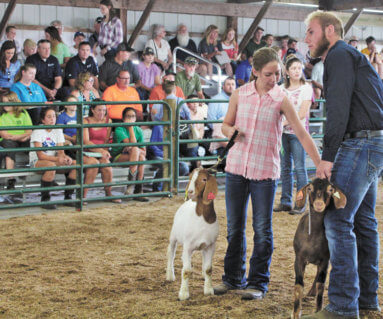 
Pictured above Dakota and Brianna Sams brought their goats into the livestock arena where they went for over $12,000. Their mother, Kristy Sams, lost her life earlier this summer. She was a big contributor to the Miss Ripley County Pageant and 4-H in general.

The Ripley County 4-H Livestock Auction got underway at 3:00 p.m. on Friday, July 26. Familiar sounds and smells were experienced as the animals were paraded in the arena to be sold. The 4-H’ers were proud of their perfectly groomed animals and buyers were in attendance to support them.

Whether the 4-H’ers had a steer or a chicken, they were all shown in the arena with several auctioneers in the stand and ring men (and woman) in the arena helping watch for the crowd to raise their number.

The livestock project is one that is valuable in many ways for those in 4-H. It teaches them that it takes a lot of work to raise the animal, then they take it to the fair, where it is show ready. The 4-H’ers are ready too, some dressing in cowboy or cowgirl boots, but all ready to hear the bottom line on the project they have cared for the entire year.

Amidst the excitement of watching the auctioneers get as much as they possibly can for the 4-H member and the animals squirming loose in the arena, the scene turned somber as Rob Vestal called the names of Dakota and Brianna Sams. The brother and sister brought their meat goats into the arena with Vestal announcing that they had lost their mother, Kristy Sams, earlier this summer. It seemed even the bleating of the animals halted and everything was quiet as he made the announcement. “We’re going to try to get as much as we can for these children,” Vestal said. He continued by saying their mother had been a big part of the Miss Ripley County Pageant, along with being supportive of the 4-H program for many years.Then he opened up the bid. “$1,000” came from John Schuerman, setting the bar high for those who continued to bid. The buyers didn’t mind, they continued with Vestal at times getting choked up as the buyers supported the Sams family with not only their kind words, but with their wallets.

The successful bidders were Versailles Farm & Garden/Mirrus Corporation for $2,100. Then the bidding was opened up to all of the buyers to bid in increments of $100 to add to that total. In the end over $12,000 was raised for the Sams children.

Schuerman, who is a big supporter of the livestock auction each year told the Osgood Journal that he just enjoys it. “I love it,” he said, when asked about coming to the auction and being a big part of financially supporting 4-H’ers. There are many other buyers who also come year after year to support the livestock auction and the 4-H’er who has spent so much time and effort on their project.

Another highlight of the auction was when Bryer Franklin’s steer went for $5,000, which set a record.

According to Dave Osborne with the 4-H Extension Office, the total as of Monday morning was over $160,000 from the buyers at the fair. He said everything was still being tallied up and that is an unofficial number, but close.

Editor’s note: See all the grand and reserve champion animals, their sellers and buyers in Thursday’s paper.