Sanitation rates to increase in the town of Milan 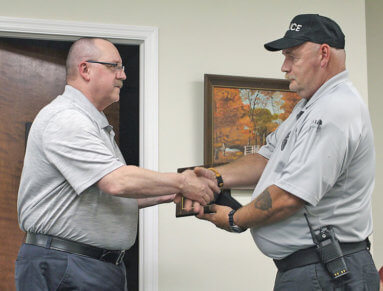 
Town Marshal Terry Wilson presented a plaque to Dan Baker, recognizing him for his service as a reserve officer for the Town of Milan.

New at-large board member Drew Olman was introduced at the August 12 meeting of the Milan town board. This was Olman’s first meeting since being sworn in on July 9. In addition, Dan Baker was recognized for his twenty years of service as a reserve officer.

It was stated the sanitation rate will increase from $13.00 a month to $16.00 a month. A new contract was recently awarded to Best Way, who was the lowest bidder against Rumpke. The new rate will include weekly trash pickup, recycling, and heavy trash days the first Friday of every month. An ordinance needs to pass for the new rate, so it will most likely go into effect in October.

Residents expressed concern over yards that are not being kept up in town. John Ingram noted that they had sent some letters out to property owners, but still has some letters to send. There were also concerns about holes that could be dangerous if they do not get filled in, including on Chippewa Ct. and the corner of Josephine and Ellis. Ingram will look into these. Ingram reported they repaired water leaks; cut grass and did weed eating in the park and town; cleaned trees around the back pond; black topped W. Carr Street, using 16 tons of blacktop; installed the stop sign at Hog Rock and put up warning signs; did smoke testing; and worked on the income survey. Ingram was able to get 28 completed, and is going to determine how many more they need.

Town Marshal Terry Wilson reported there was one citizen assist, five theft reports, two VIN checks, four domestic calls, one paraphernalia arrest, six traffic warnings, one battery, two personal damage accidents, one warrant arrest, 55 calls for service, two assists to Fire/EMS, and eight assists to other agencies. There were a total of 46.5 reserve hours for the month of July.
Milan Lions Club president, Andy Schwier, informed the board they were looking for new members. Some of the projects they have worked on in the community are the 4th of July Parade, Milan calendar, Ticket Sales, and the Holiday Decorations and Banners, as well as contributing to the park board with the basketball court and 5K. He expressed the Lions Club is a service organization, with their motto being “We Serve”. Schwier went on to extend their assistance to work with the town of Milan on service projects.

The park board reported they made more on the 5K than they did last year. They will use the money raised to redo the parking path and replace 17 benches.

The next regular meeting of the Milan Town Council will be held September 9 at 6:30 p.m. in the Town Hall.