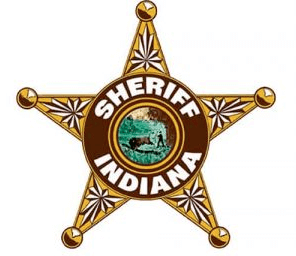 54-year-old Rick Daniels was trying to unload a trailer-load of household stuff into their new storage at South Ripley Storage in Versailles recently. He told The Versailles Republican he walked to the Versailles State Police Post looking for help. For most people, that wouldn’t be a big feat – but for Rick – it’s another story because he’s a double amputee from the knees down. Actually, he just had one leg amputated six months ago and is getting used to a new prosthetic device.

Rick and his wife, Donna, just moved to the area from Tennessee. They are trying to get settled and were putting their stuff in storage. They just needed a little help. When Rick went to the police post, he didn’t get inside, but sat on a curb waiting for their reply as they called the Sheriff’s Office.

“Sgt. [Corky] Houseworth pulled up, put me into his car and we went to the storage building,” Rick noted. He said the next thing he knew Sgt. Houseworth was putting on his gloves. Within 5-15 minutes more cars arrived that included Brian Reddick and Randy Thieman. “In just a few more minutes about ten people were helping us – it was overwhelming, we are so blessed with these great people helping us when we needed it most,” Rick said. “They didn’t stop until the job was done.”

Rick, who is an Army veteran, moved to Tennessee to volunteer with veterans who have lost limbs. He knows the depression that sets in and wanted to help in these situations. The couple has now moved on and has moved back to Indiana to be close to their daughter and grandchildren who are living in Ripley County.

“I’ve got a lot to be thankful for,” Rick said. He says his wife is a “clearance” shopper and likes to buy for children in need at Christmas. “She once took $200 and got $3,000 to $4,000 worth of toys!” he noted. “I used to hate Christmas, but now it blesses our hearts to give to others.” The couple enjoys going to hospitals and nursing homes bringing Christmas cheer.

Rick said he wanted to take time out to thank these officers for all they did for him. “It has truly blessed our hearts,” he concluded.

When Sgt. Houseworth was contacted, he quickly deflected from what he did to the others who helped. “They all came together quickly to help.” He said people from Randy Thieman’s church – Shelby Christian – were quick to respond as well as the deputies. “We couldn’t just leave him there with no help,” Sgt. Houseworth told The Versailles Republican. He said he really didn’t know all the details about why Daniels needed help, but could quickly see he was in need. He said officers from the Batesville Police Department also helped the Daniels family with the remainder of their load when they found another storage unit there to get all their belongings secured.

Sgt. Houseworth, who is also a veteran, said it just felt like the right thing to do and was glad to be in a position to do so.

It’s not that the local police have gone into the moving business, but rather, they know when someone is in desperate need and are willing to go the extra mile to help.

Chief Deputy Kurt Enneking said he is proud of the deputies as usual, saying, “They do things like this more often than not. They go above and beyond so many times. People just don’t realize what they do.”