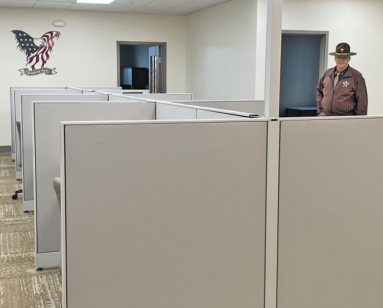 
There are eight separate offices with the center where he is standing open for deputies to have individual stations.

The sheriff’s office is on the move, literally. They will be moving into their new space on the second floor of the Ripley County Annex building in Versailles soon. The move came about as a need for additional space has crowded the office out of the present location it is in now at the jail at 210 Monroe Street.

The medical exam room and initial holding cell at the Ripley County Jail also serves as the nurse’s office, including storage space. The small bathroom just outside the aforementioned room is also stacked with boxes of files serving as a storage closet as well.

That’s just one example of the cramped space at the Ripley County Jail that has also housed the sheriff’s administrative offices.

Sheriff Jeff Cumberworth approached the commissioners with the problem earlier last year. There was a 3805 sq. ft. room on the second floor of the courthouse annex that was being used for minimal storage, according to the Sheriff. “This was designed for future expansion,” he noted.

The unused space seemed like a perfect solution to the present overcrowded space at the Sheriff’s office. The county could pay for the renovation to transform one large room into a workable sheriff’s office that could house 15 deputies and administration, along with an evidence room big enough to take the department well into the future.

Sheriff Cumberworth noted that bids were opened with Aaron Nobbe Construction being the lowest bid at $149,900. This money was taken from already existing EDIT funds and would be no added expense to taxpayers.

The Sheriff paid for all the furniture for the project out of his commissary fund, which was around $60,000. By using existing space already owned by the county, taxpayers were spared any additional burden from the project.

The new space has been renovated to make eight separate offices for the Sheriff and administration that includes the matron and deputy matron. There is an open area for the deputies with each having his/her own space. A separate office and locked storage area is in place for the evidence technician. A conference rom is available that is a shared space on the second floor and can be used by any office holder. “This will be a great space for us to hold merit board meetings and sheriff sales,” the Sheriff noted.

The Sheriff’s office at the jail will now be used for an expansion for the nurse, an office for the Jail Commander, transport officers, parole visitation, room for excise officer, who frequently respond to incidents in Ripley County, and a training room. Deputies are required to have ongoing training and the sheriff noted that was beginning to be a problem to get a space.

“I am thankful there was space available we could move into without costing undue burden on taxpayers,” Sheriff Cumberworth told the Osgood Journal. He said if they had to start from the ground up to accommodate their growth, it could have cost $2M or more. “Nobody wants their taxes raised; we just had outgrown our space here,” he concluded.