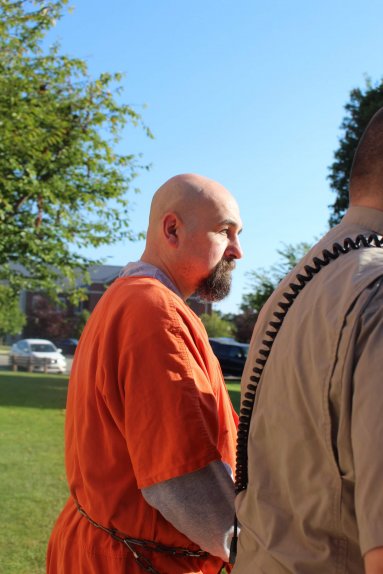 
Brian K. Simms takes his last walk of freedom before he leaves for the Indiana Department of Corrections to begin a 25-year sentence. He was being led from the Ripley County Courthouse after sentencing on Wednesday morning by Jailer Matthew McFarland.

Brian K. Simms, 42, Batesville, will spend the next 25 years in prison. That was the agreed upon sentence that Judge Ryan King accepted in Ripley County Circuit Court Wednesday morning, August 4.

Simms had pled guilty to Child Molesting in June after he was incarcerated on February 12 of this year and charged with the offense.

The victim was in the courtroom as Chief Deputy Prosecutor Shane Tucker read three victim impact letters that were entered into evidence. The letters told how Simms had negatively affected their lives forever by his actions.

“I’m sorry for everything…I don’t know what made me do the things I did,” Simms tearfully told the Court as he turned and looked at the victim. He put his head down and cried with his defense attorney at his side.

The 25 years in prison comes with credit given for 173 actual days served in Ripley County Jail, and the possibility of only serving 85% of that sentence on good behavior. Simms will have to register as a lifetime sexual violent predator upon release from prison and have no contact with the victim. Judge King noted that the letters were considered additional aggravating factors.

Some family members in the courtroom were outraged by Simms being labeled a violent sexual offender with Bailiff Lloyd telling them to quiet down.