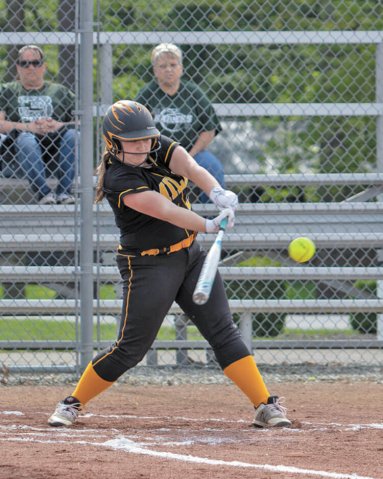 
Milan sophomore Abby Ferreira makes contact with a pitch. Although Ferreira didn’t get a hit against South Ripley, she’s hitting .442 on the season. She’s got 19 hits and seven RBIs total.

The South Ripley Lady Raiders went on a seven run streak in the sixth inning to break open the game and earn a win over the visiting Milan Lady Indians on Monday, April 29.

Before that, the game was close at 3-2 going into the bottom of the sixth inning. A two-run effort by Milan in the top of the seventh wasn’t enough to pull back into the mix.

For Milan, Courtney Bruns and Erin Widener led their offense with two hits apiece. One of Bruns’ hits was good for a triple, while one of Widener’s was good for a double. Cassie Franklin and Mackinze Deffinger each added one hit. Widener pitched the whole game for Milan, striking out four while giving up nine hits and six earned runs.