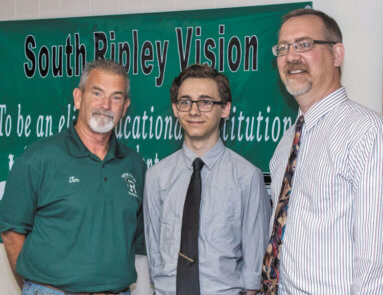 
South Ripley senior Andrew Conrad was recognized at the school’s October board meeting for being named a National Merit Commended Student thanks to his stellar PSAT test scores. Pictured with SR board president Tim Taylor and SRHS principal Joe Ralston, it was shared that Conrad placed among the top 50,000 students out of 1.5 million across the country taking the test this year. Those numbers work out to show that Conrad was among the top 3.5% of students. Conrad plans to pursue marketing and graphic design after high school.

Prior to the October regular meeting of the South Ripley Board of School Trustees, the board held a project proposal hearing, pursuant to Indiana code for any project with a cost of more than $1 million financed by lease or bonds, as previously advertised by law in the local newspaper. “We’ve been looking at our HVAC facilities, knowing that they are in need of repair,” SR superintendent Rob Moorhead told the board. South Ripley Elementary School is currently operating on two working compressors in its chiller out of three total, with the entire system being deemed vulnerable and in need of attention due to its near 30 year age.

The school decided to pursue an energy savings project that would include replacement of the HVAC system at the elementary. Other potential upgrades from the project may include interface controls for the HVAC system, boiler maintenance, outdoor lighting, and building automation at the high school, and upgrades to the fire alarm system and intercom/clock system at the elementary school. The final scope of the project is to be determined and approved by the board after further investigation and estimates are received.

Supt. Moorhead shared that the corporation advertised for bids, and of three companies presenting to the board, EMCOR Construction Services was chosen to complete the project. Tim Pitts of EMCOR was present at the hearing and noted that the school’s HVAC equipment was indeed considered to be at the end of its effective lifespan, with some components operating for even longer than expected.

Damian Maggos, underwriter for Raymond James Public Finance, addressed the board after Pitts, regarding the finance structure and effects on property taxes. Maggos reminded the board that costs factored into this initial proposal are maximum numbers, with the true cost hopefully being lower, thereby lessening the financial impact on the school corporation and taxpayers. He quoted the total cost of the project to be just shy of $5 million, which will be placed into a construction fund. Bonds will likely be issued in March of 2020 with receipt of monies in April of 2020, construction beginning in May 2020, and the first payment being due in July 2021.

Maggos provided reference numbers as to the impact on taxpayers. Overall, the tax increase should be about 6.35 cents per $100 assessed valuation in 2021. For a home/property valued at $100,000, Maggos said that amount of increase would translate to roughly $20 per year, or about $1.73 per month. One acre of farmland would see an increase of around eight cents per month, or $1 annually, and commercial property would see an increase of about $5.29 per month, or $63.50 annually.

“These are maximum numbers,” Supt. Moorhead reiterated. He told the board that the project is needs based. “It is not frivolous, we need heating and cooling in our schools,” he said.

Jane Herndon, Bond Counsel with Ice Miller, was present and explained that a Project Resolution for the project is required because the school is planning to spend more than $1 million per building. A motion was approved for the resolution. The board went on to approve a Reimbursement Resolution that is required by the IRS to allow reimbursement to the school corporation for any costs of the project it pays for in advance of the issuance of bonds. Herndon concluded her presentation by saying that she will work with the school, EMCOR, and Raymond James throughout the project to meet timelines and ensure tax impact is kept to a minimum.

With no public comments made, the hearing was closed.