Rob Lafary
Staff Writer
Published in the Versailles Republican, May 13, 2021 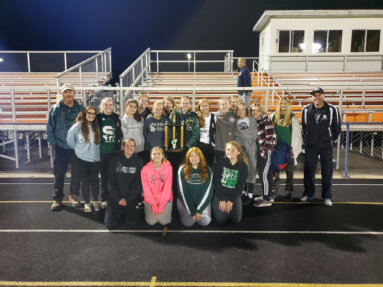 SR girls track and field is all smiles after winning the ORVC Championship meet on Tuesday night. The Lady Raiders had four first place finishes in the meet.

South Ripley captured the championship on the girls side while several locals starred on the boys side as part of the Ohio River Valley Conference championship meet on Tuesday at Switzerland County.

Ripley squeaked by Jac-Cen-Del to win the girls conference crown, scoring 110 points while the Lady Eagles placed second with 101 points. Switzerland County was a narrow third at 100 points while Rising Sun was fourth with 50 points and Milan placed fifth at 34 points. Southwestern (Hanover) and Shawe Memorial wrapped up the standings.

Third place finishers for the Lady Eagles included Kayla Simon in the 100 hurdles in 17.21 seconds and she was third in the 200 dash in 28.28 seconds. Both Simons, Megan Weber and Lauryn Dilk ran the 1600 relay in a third place time of 4:34.96 and Autumn Norman, Marie Gohr, Allison Peetz and Kinsey Rohls finished third in the 3200 relay in 12:54.03. Also finishing third in a time of 57.74 seconds was the 400 relay team of Regan Hughes, Dillan Hughes, Linville and McKenzy Gray.

Newhart was third in the discus at 80 feet and four inches.

Southwestern won the boys meet with 110 points and Milan came away runner-up, scoring 97 points on the evening. Jac-Cen-Del was third with 82 points, Rising Sun had 63 points for fourth and South Ripley was fifth with 51 points. Switzerland County and Shawe rounded out the field.

Jac-Cen-Del had two conference champions as Josh Pohle won the 3200 run in 10:53.44 and Luke Comer won the discus with a throw of 138 feet and four inches. Corbin White was runner-up in the shot put at 41 feet and two inches, Christian Comer was second in the long jump at 18 feet and 11 inches and Yuki Casado ran second in the 400 dash at 53.98 seconds. The 400 relay team of Deshawn Sutter-Johnson, Jacob Jines, Christian Comer and Luke Comer ran runner-up in 48.27 seconds.