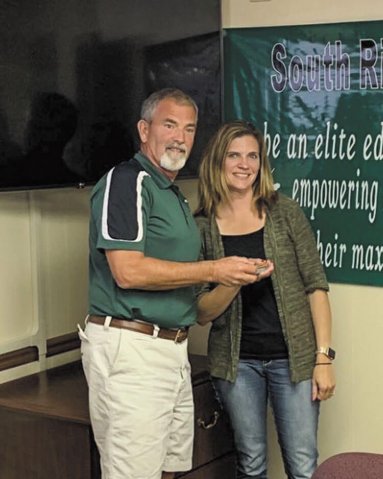 
Members of the South Ripley Board of School Trustees welcomed Lori Samples at the July meeting. Samples is filling the leave of absence on the board while Robert Garcia is serving in the military. Board President Tim Taylor presented Samples with a pen and key chain and thanked her for her willingness to serve the community.

At the July 15 regular meeting of the South Ripley Board of School Trustees, Superintendent Rob Moorhead sought approval to continue the preschool program at South Ripley Elementary for the upcoming 2019-20 school year. This program was initially known as Readiness Kindergarten two years ago when the state legislature made funding available for schools to offer pre-K classes onsite. That funding was axed after the initial year, though, so South Ripley decided to continue the offering the following year by charging $20 per day per enrollee.

At the time of the meeting, the enrollment for this upcoming year was six children, with a possible seventh considering. Moorhead noted that eight and a half enrollees are needed for the school corporation to “break even” financially. With the number of students currently enrolled, however, Moorhead did not want to take away the opportunity for the children to attend a quality preschool for the year, especially as the time for school to begin draws so near. The school board agreed that the pre-K program was a beneficial offering to the community and that the corporation could subsidize the cost if enrollment was slightly short this year. Further, they agreed to reevaluate in May 2020 to decide if the program is feasible to continue in the future. Enrollment into preschool will remain open throughout the 2019-20 school year. Moorhead assured the board that kindergarten enrollment is steady and not related to the school’s preschool venture.

Board members present at the meeting were Jeff Cornett, Carol Holzer, Danielle McGee, Randy McIntosh, Andy Miller, Lori Samples, and Tim Taylor. School Attorney Merritt Alcorn was also present. The agenda was approved with the addition of one action item for the signatory for the purchase of land. June minutes, claims, and the financial report were all accepted.

The 2019-20 bus driver directory, which lists all available drivers, substitutes, and aides was accepted. A list of all volunteer coaches and the ECA master list were both accepted, too. Board member Lori Samples abstained from voting on those lists since her name is on them.

The board granted approval to increase the hours of the LPN position at the junior high and high school from five hours per day to 5.75 for the upcoming school year. The LPN will work daily from 8:45 a.m. to 3:00 p.m. each day with a 30 minute break.

The 2020 budget timeline was approved as submitted. The board will meet to begin discussing the budget next month.

A monthly field trip for the functional skills special education class was approved for the upcoming school year. The class will travel to Sam’s Club in Florence, Kentucky as part of their regular curriculum.

A list of technology related items were presented to the board with the request they be rendered obsolete. The list was unanimously accepted.

Superintendent Moorhead recommended and was granted approval to purchase a new 2019 Freightliner 78 Passenger bus from Kerlin Bus Sales through the IAESC Procurement (Wilson Center) in the amount of $88,247. This is within the guidelines of the South Ripley School Bus Replacement Plan for 2019-2023.

The board authorized the publication of a Notice for Request for Qualifications for a Guaranteed Energy Savings Project for South Ripley Schools. Responses are due in the administration office by 1:00 pm on September 3, 2019.

School Attorney Merritt Alcorn gave an update on the purchase of property. He reminded the board of the prior agreement that was approved for the purchase of real estate. The survey is complete and closing is set for July 30. The board authorized Superintendent Moorhead to sign all documents at closing.

Under information items, Superintendent Moorhead shared that student registration letters would soon be mailed. Registration and bookstore hours at all buildings are set for August 1 and 2. Online registration is also available.

Superintendent Moorhead informed the board that South Ripley High School, through an application submitted by Brenda Strimple, was awarded a $1,000 grant to help fund Champions Together activities in the 2019-2020 school year. Superintendent Moorhead also updated the board on the recent Champions Together awards program. South Ripley was one of only four school districts in the state to have both a junior high and high school that received a gold banner. Thanks were extended to Brenda Strimple and Trace Tucker for their efforts in the Champions Together program, as well as Principal Destiny Rutzel with the junior high program. Senior student Ashley Jones was congratulated for receiving second place in her video competition portraying the “Spirit of Unified Champions.” Brenda Strimple was also congratulated for being the coach of the unified bowling state championship team.

With no further business, the meeting was adjourned. An executive session was held prior to the regular session to receive information about prospective employees and to discuss a job performance evaluation of individual employees.