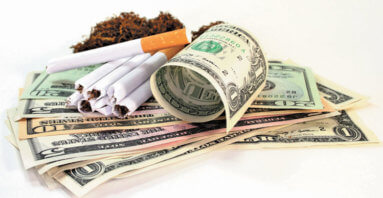 Those representing people who would like to see a $2 per pack hike on cigarettes made their petition known recently at the Indiana Statehouse. These people had personal stories of loved ones they had lost due to smoking.

The average cost of a pack of cigarettes is $5.51 with the price in most states being between six and eight dollars. There are also more expensive brands that can average up to $12.85 a pack.

But, the cost of smoking was not simply about the price that people pay with money. Amy Lutz was one of those speaking at the Statehouse. She said she was a “cancer orphan” when both her mother and father passed away from lung cancer within 31 days of each other. The Westfield resident said, “The legislature needs to understand that smoking touches the lives of all Hoosiers – whether directly or indirectly.” She went on to say, “Governor Holcomb and our lawmakers can re-write stories like mine and ensure other Hoosier families don’t suffer the pain and loss that I have endured.”

In 2018, a poll of Indiana voters showed all party and political affiliations strongly support raising the state’s cigarette tax as a smart solution to improve Indiana’s critically poor public health.  According to the Raise It for Health campaign, 70% of voters supported the increase with some revenue being dedicated to tobacco prevention programs to keep kids from using tobacco and help smokers quit.

Talking locally with a smoker, who didn’t want to be identified, she said that raising the cigarette tax will not stop her from buying the cigarettes. “It’s just that addicting,” she noted. It’s not that she wouldn’t like to quit, but tobacco is highly addictive.

“Smoking kills approximately 30 Hoosiers a day, which adds up to 11,000 residents dying each year from tobacco-related illness,” said Bryan Hannon, Indiana government relations director at the American Cancer Society Cancer Action Network and Chair of Raise It for Health. He said while lawmakers heard from two people, they didn’t hear from the thousands of other Hoosier families who have experienced similar outcomes within the last year. “It is irresponsible for Indiana lawmakers not to increase the cigarette tax when they know doing so will save lives,” he finished.

Madeline Wilson, speaker at the Statehouse event, and Martinsville resident, said she has lost multiple family members to smoking. She described the scene as she tried to revive her brother, but was unsuccessful. “For 31 minutes I pumped on his chest and tried to breathe life back into his body – praying to God that He would make my actions the ones that would save his life.” Her brother, who was only 48-years-old and a father to four children, died in her arms. He was a smoker.

Information from the Raise It for Health campaign says they bring together health and business leaders in Indiana to support a cigarette tax increase of at least $2 per pack to reduce smoking, save lives, strengthen the workforce. They said raising the revenue that can be dedicated to urgent public health priorities, including helping more smokers quit and tackling the opioid epidemic, is what they are about.

The coalition has over 200 partner organizations like Tobacco Free Indiana, Alliance for a Healthier Indiana, Indiana Chamber and Indiana Hospital Association. They are leading the charge for the increase on cigarettes.

The Raise It for Health group believes that while Indiana has made great strides in attracting new businesses, the poor health rankings are holding the state back from achieving more success.  On their website they noted, “Companies and site selectors consider workforce health when making decisions to locate or expand in the state, and Indiana could be missing out on valuable opportunities due to a lack of focus on health and smoking prevention and cessation.”

According to the U.S. Surgeon General, “research concludes that cigarette smoking is a significant predictor of both the possibility and the frequency of other drug use. This research suggests that higher cigarette prices, by discouraging smoking among youth, could significantly reduce youth and adult drinking and illicit drug use.”

A $2.00 increase in the cigarette tax in Indiana will raise over $300 million, according to Raise It for Health. They also note that over a million adults in Indiana smoke, that’s one in every five Hoosiers.