Tornado siren to be tested monthly 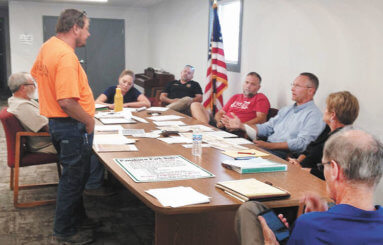 
Calvin Daugherty stands before the Versailles Town Board members asking them about citations he has received for not having some lots mowed in the Harvest Ridge Subdivision where he is developing lots. The conversation became heated with Attorney Larry Eaton telling him the best thing to do would be “just mow your lots every two weeks.”

If you hear a siren in the town of Versailles on the first Monday night of each month – you’re supposed to. That’s when the Versailles Fire/Rescue will be doing a test to make sure everything is working properly. This transpired from the last time the siren went off without warning and nothing was amiss.

Fire Chief Ben Sieverding noted that it is fixed and residents need to know that the siren should only sound if a tornado warning or a severe thunderstorm warning with tornado watch has been issued by the weather service. Otherwise, the siren will sound off around 6:30 p.m. each first Monday of the month. Sieverding explained that when a severe thunderstorm with the potential for tornadoes is sounded, they have firefighters who are trained weather spotters who check on the situation to quickly alert the town if a tornado is spotted in the area. If a tornado warning is issued, don’t wait for anything else, take shelter in your home or one of the two shelters for the public: The Tyson United Methodist Church on Tyson Street and The Church of Christ on Jarvis Drive. A tornado watch means the elements are favorable for a possible tornado, but one hasn’t been spotted. The siren will not sound for only a watch.

The first portion of the Versailles Town Board meeting held July 9 involved hearing from residents who had concerns about clean-up efforts the town is making.

Wayne and Beverly Miller were in attendance with Beverly speaking for the couple. She showed pictures of their place at 561 S. Tanglewood to town board members and then explained the reason for the way their property is decorated. “We have antiques, but a lot of people call it junk,” Beverly noted. She said the tree in the front yard has numerous antique items that are tied to memories. These are “precious family memories” she told the board. She said her husband, Wayne, has been through chemotherapy and has been very sick. She agreed during that time their place may have been more cluttered, but, said, “it’s not trash.”

Steve Mathes, town board president, said, “The struggle the town has is where do we draw the line?” He was referring to their stuff, the history of the memory tree, etc.

The board said they would take everything into consideration. “Give us a chance to talk about this,” he said.

The subject of people going too fast on Tanglewood Road was brought up by Beverly. She said the speed bumps are not doing the job. Mathes said they will look at the situation and install stop signs at Tanglewood and Horton and at Tanglewood and West streets.

Beverly’s third point was about Pangburn Park. She said it was a disgrace and she spent hours cleaning it before their church could use it to serve food to children this summer. She said there were items such as needles, condoms and more that she wouldn’t want anyone – especially kids – to get ahold of. Mathes thanked Beverly for cleaning at the park and said, “it sounds like we need to beef up security” (at the park).

Calvin Daugherty, developer in Harvest Ridge Subdivision, came before the board concerning citations he had been issued for not having his lots mowed. He brought the paperwork and laid it on the table before the board members. He asked how he was supposed to know what they wanted? Marshal Joe Mann showed Daugherty where the sentence was in the paperwork about what happens when the grass is over a certain height (this includes weeds, too).

Daugherty continued by asking about the fines, etc. He said he was “insulted” that the board couldn’t pick up the phone and talk with him about their concerns. He accused board member Roxanne Meyer of screaming and yelling at him over the matter, to which she said “Sir, I never screamed or yelled at you, I don’t even know you.” The conversation went back and forth with Daugherty saying he was going to take the matter to his attorney. He continued talking until Marshal Mann walked up to the table, collected the paperwork belonging to Daugherty and said, “Let the attorneys figure this out” telling Daugherty he was done. Daugherty left saying they haven’t seen the last of him.

Another property was discussed that Attorney Larry Eaton said he would send a letter advising the property owner to be at the next town board meeting.

Chief Sieverding gave the report with part of their duties for the month of June including 53 calls and 19 already by July 9. He said they have assisted other departments several times, had 14 vehicle accidents in the month of June, some with extrication. He noted they have received a grant from homeland security for $6,000 to purchase a tool for the department. Four firefighters passed the Firefighter One and Two classes, four were trained on rope and rescue and more had passed the Hazmat and EMT exams. He reported that the rescue truck is having problems and they are looking into it.

Shannon Schmaltz and Amy Cornett followed up with the board about the sewage problem at the Tyson Activity Center. They were told the problem was theirs, but the town was willing to assist with some labor, etc. to help them out. The town provided some estimates they had obtained for getting the needed lift station.

Next month the town will be looking at a provider for trash pick up. They have requested bids from three companies and will also look at recycling options along with heavy trash pickup.

The next regular meeting of the Versailles Town Board will be August 13 at 7:00 p.m. at the town hall located on the square.