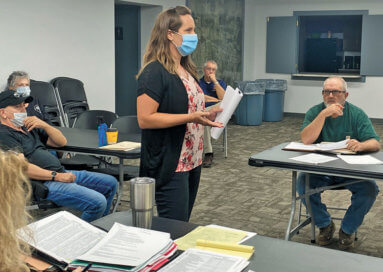 The Versailles Town Board had a full agenda when they met in regular session on August 13 at the town hall.

Erin Thomas, executive director of LifeTime Resources, an organization that promotes the well-being of the elder population, came before the council explaining what they do for the people in Versailles. She noted they have the Catch A Ride program, and also offer meals. “Do you deliver home meals?” Roxanne Meyer, president of the council, asked. Thomas said, “We do offer meals, but we don’t deliver (hot meals).” She said they were frozen meals that could be easily made.

Thomas noted that in the Versailles area, last year the Catch A Ride program offered 1700 trips. She was at the meeting to ask for minimal funding, since they are a non-profit organization. She told the council they have received a generous grant due to COVID-19, and are only asking for $400 from the town for their part to help also.  The council took this request under consideration.

Susan Underwood came before the council with a request to hang flags in the town in November. She said the Military Honor Flag Project will have funds for 25 flags of military (past or present) in the town of Versailles for this year. She asked for the town’s approval to hang them, which was graciously given to her. This is a project sponsored by the Delta Rho Chapter of Tri-Kappa, Versailles-Osgood. Tri Kappa, with the assistance of the Versailles American Legion Auxiliary Unit #173, Leora Weare Post, are making the project a reality at no cost this year to the South Ripley and Jac-Cen-Del school districts. “We plan to add more next year,” Underwood told the council.

In other business: the council gave unanimous approval for streets to be closed for the Annual Bike Show on September 12, and Legionfest on September 29, as long as both groups have met the county’s health requirements during this time of the COVID-19 pandemic. Both are outdoor events.

Fire Chief Ben Sieverding gave his report noting the department had been particularly busy, responding to 12 vehicle accidents, three that required extrication, a year-old (who was found safe), six structure fires, and many assists to other departments over the past month of July where they logged 63 total calls. He noted that Firefighter I, and Firefighter II classes will begin in November if anyone is interested in becoming a firefighter for Versailles. They can stop in on Monday nights and see what it’s all about.

Kevin Hensley, maintenance supervisor, gave his report with each day for the month of July outlined with various duties his crew performed for the town. They replaced 11 water meters, did the usual mowing – including ball fields, flushed hydrants, tested chlorine, and cleaned manholes, as they do monthly. They are a busy crew with the usual town work that also includes trimming bushes, installing downspouts, cleaning trash at Pangburn Park, repaired the sidewalk on the square, cutting trees and much more.

A good portion of the meeting was hearing about different ordinances and how the town attorney, Lynn Fledderman, will now proceed. Properties that the town board has worked with for many years, will now go to court and unlicensed vehicles will be towed.  Fledderman discussed the legal ramifications of not keeping property in compliance with town ordinances. Also, if residents have a complaint about someone’s property, etc., they can fill out a formal complaint that will be given to the town president, who in turn would get it to the attorney for action.

Town Marshal Joe Mann will be tasked with filling out reports on the ordinances that are being broken and getting those to the town council. He already has been monitoring some properties, trying to work with the owners, but it seems to be a recurring theme at each meeting. He has written citations – and some have been paid.

Marshal Mann also noted that he would be ordering a taser, some accessories, and would be needing radios at $3700 each, along with a scanner, computer and laptop.

It was noted that those who have not paid their water bills throughout the Governor’s order to halt those for a period of time, will now be disconnected due to the mandate being lifted. It’s a big expense for the town as well if people don’t pay these bills.

Discussion was had on the Benham Road project with the council and attorney agreeing they would have a public meeting inviting the homeowners who would be affected.

Ending on a bright note, Meyer gave a MainStreet update saying flower pots have been purchased with money from their mask project and will soon appear in the town with fall mums.

The next regularly scheduled meeting of the town council will be September 10 at 7 p.m. at the town hall on the square in Versailles.