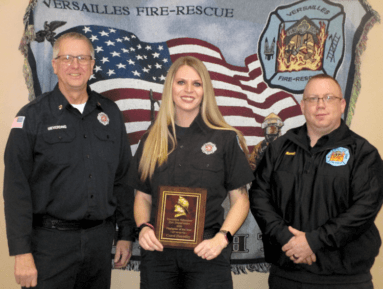 
Pictured above from left Versailles Fire Chief Ben Sieverding, with Cassi Hornsby, Firefighter of the Year, and President Randy Hornsby.

With a major issue staring the Versailles Fire and Rescue in the face, they may not be able to keep going as they are, according to Chief Ben Sieverding, who attended the Versailles Town Board meeting last week.

“It’s not sustainable,” Chief Sieverding told board members as he talked about the situation as a whole. Right now they are looking at $110,000 that is needed for the Self Contained Breathing Apparatus that each firefighter needs to be compliant with State mandates. He said they are working on grant funding for this project, but are still facing an uphill battle with finances.

In 2020 the department had a record setting year as they responded to 613 calls. “This proved to be the largest call volume for a year in department’s history with 2669 man hours on emergency scenes and 1302 man hours in training,” noted Chief Sieverding. The department also responded with mutual aid to neighboring communities 61 times. In 2019, the department responded to 569 calls, which was another high year.

Chief Sieverding reported that about half of those serving in the department have received COVID-19 vaccines. He noted that the REMC Roundup grant for new butterfly valves on engines was $2200 and the Rising Sun Regional Foundation has given $12,000 for new helmets, which were badly needed being 12 years old.

The department received an Indiana Fire Chief’s Association Grant for Retention and Recruitment of firefighters.

Chief Sieverding said they are limping by and knows it won’t be long before they won’t be able to operate as they are. “Something more permanent has to be done,” he noted. They have had the fundraisers they could, but that falls way short of what is needed. The Chief told board members that the firefighters don’t feel supported, especially after the Fire District was met with such opposition.

New board member Mike Daugherty told Chief Sieverding that he is impressed with the department and thanked him for the professionalism he has seen first hand.

The fire department holds a 22 volunteer firefighter roster. They are always looking for volunteers. To contact them you can call Chief Sieverding at 812-621-1150 or Deputy Chief James Vest at 812-621-0688.

This past year they have had COVID expenses of $3196.00 for Personal Protection Equipment (PPE) and to disinfect the trucks. They have given mutual aid 61 times to area departments, and have received mutual aid 7 times from others.

Letters will be sent by Versailles Clerk-Treasurer asking for donations for the fire department. If anyone is interested in sending a donation, they may do so by sending it to Versailles Fire Rescue, P.O. Box 434, Versailles, IN 47042.